We recently had the opportunity to ask Jeremy Slaczka, CEO of 5th Cell questions about their upcoming sci-fi shooter Hybrid. During the interview we talk about the game’s unique control scheme, design, and the drastic departure that 5th Cell made in choosing to develop Hybrid. Read on to get the low down on what could be this year’s most unique multiplayer frag fest!

XBLA Fans: First off, thanks for taking the time to talk to us. To kick things off, can you give us a brief overview of the world of Hybrid? What kind of place will players be stepping into?

Hybrid is set in the future, after the implosion of a Hadron Supercollider, destroying Australia, and causing dark matter to spread throughout the globe. Time itself destabilized, causing an alternate reality to collide with our own, creating a super-species of humans known as the Variant. 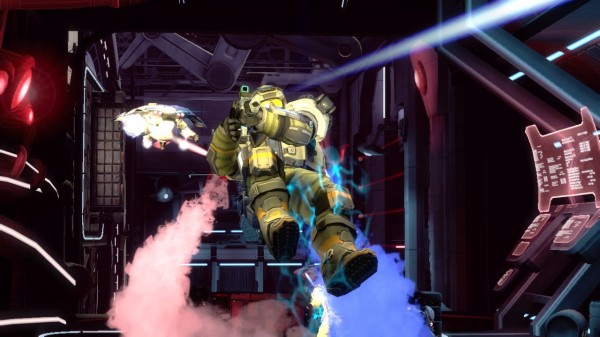 XBLA Fans: One of the biggest things that distinguishes Hybrid from the rest of the shooter crowd is its control scheme. You actually use the face buttons on the controller to move. Can you explain exactly how this works to those of us unfamiliar?

We use a system we call “Combat Focused Movement”. You simply look at one of multiple cover points in your line of sight, press the A button, and you’ll automatically fly there. While in-transit you can use the L-Stick to strafe or push it in for a quick speed boost mid-flight. You can also select different cover while in flight simply by looking at it and pressing A again or press B to retreat. It’s very simple and very intuitive, but gives the shooter genre an entirely new spin.

XBLA Fans: On that same note, flight was one the big new features recently announced for the game. Can you go into detail about how the flight mechanics work and how much control players have?

We had implemented flight at our GDC demo, it just wasn’t as much of a focus as it is now. Last year we found that when we gave players the options to run or fly, they mostly flew as it was faster and more direct. We decided to remove running on the ground from cover to cover and focus on making flight better, like allowing players to strafe in any direction to avoid enemy fire. It was definitely the right choice.

XBLA Fans: The control scheme in shooters these days is pretty much standard. What kind of edge does your control scheme give Hybrid over the setup we’re used to and your competition?

We wanted to make a competitive online shooter that forces the entire experience to be about cover. The way most players interact with online shooters that feature cover are to ignore cover mostly because it simply not the most viable option. This is very different from how real-life soldiers fight. They think tactically. We wanted to replicate that, but obviously in a sci-fi setting where people use jetpacks. 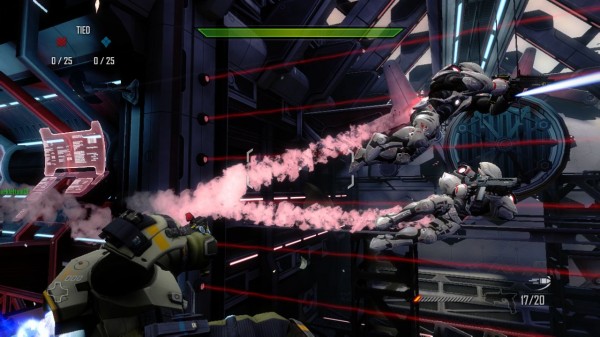 XBLA Fans: While we’re talking about controls, how are the actual aiming controls and shooting mechanics? At their core, shooters are really about…shooting things! How much fun are we going to have pulling the trigger on each other in Hybrid?

Our aiming has been very solid for a long time actually. It was extremely important to get that right so we’ve spent a lot of effort behind the scenes so to speak focusing on tweaking the L-Stick deadzones, to ensure combat felt crisp. The game runs at a locked 60FPS as well which makes combat and aiming buttery smooth. I’m really proud of our shooting. I actually believe that a lot of shooters wouldn’t hold up to our aim controls in a side by side comparison. I’m not saying this because I’m trying to hype up our game. I truly believe we have top notch aiming because we’ve been pretty obsessive about it over the last two and a half years. On top of all this there are a ton of weapons and ability combinations, giving the player a lot of choices for how exactly they want to…shoot things.

XBLAFans: The “persistent online war” concept is yet another feature unique to Hybrid. Can you explain exactly how it will work?

It’s pretty simple; you join a faction, Paladin or Variant, and jump right into a full-fledged world war. You help build bases on territories across the world for your faction by fighting and winning battles. Completed bases give your faction points, the team with 100 points wins the season.

XBLA Fans: It’s pretty easy to envision people becoming hooked on Hybrid. You’ll always want to be online fighting for your faction, defending or taking territory. Does 5th Cell have any plans to keep the world of Hybrid changing post-launch?

It depends on how fans react to the game. We’re very interested in continuing development on Hybrid, but only as long as our fans want that change. How they perceive the game is really the most important thing.

XBLA Fans: If I’m not mistaken, up until now, all of 5th Cell’s releases have been 2D games. What has it been like making the jump to a full blown third-person shooter? What inspired you guys to take on something drastically different from what you’ve done in the past?

Making the jump has been very educational. We wanted to go smaller when we tried 3D just so we could build our internal pipeline, and build up a good understanding of 3D development as a studio – hence our decision to make an XBLA title.

We absolutely achieved that with Hybrid. For us it was a huge departure from our other designs, because we don’t like being put into a box of what we’re “supposed” to do. If you’re known for 2D quirky family games, what’s the most innovative thing you could do? Make a 3D hardcore focused shooter, of course! 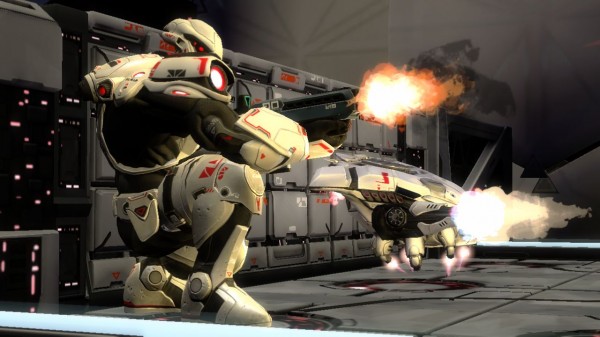 XBLA Fans: This is also the first time you guys have worked with Microsoft. What has it been like working with them and on Xbox Live Arcade?

Since we’re self-funding the game they’ve been in a mostly supportive role, offering help like usability testing in their labs, and giving us suggestions from their production department on how to navigate the Arcade pipeline. We like to be as independent as possible, but either way they’ve been really great to work with. Everyone really cares about our game and helping us to make it succeed.

XBLA Fans: You’ve stated that 2012 will be a prolific year for 5th Cell. Four releases are anticipated. Run, Roo, Run for iOS was the first and Hybrid is another. Is there any chance fans of XBLA have more to look forward to from 5th Cell?

Sorry, but only Hybrid will be on XBLA this year.

XBLA Fans: Last question! Tell us why we should be looking forward to playing Hybrid this summer!

If you’re looking for something new in the shooter genre that’s also very high quality, but doesn’t cost you an arm and a leg, then I can easily promise that Hybrid is for you. It’s a high quality gameplay experience you’ve never had before and everyone who’s tested it so far is having a blast. And you will, too!