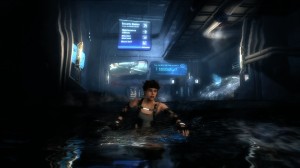 In our interview with Hydrophobia’s developer Dark Energy Digital, fans got an idea of how the game originated, and how it was not originally intended as an XBLA title. But if you want to get an idea of where the planned trilogy is headed in its sequels, then players should check out the game’s challenge rooms, which are only unlocked after the campaign is finished.

These Challenge Rooms introduce players to nanotech powers, which allow for manipulation of water using the game’s impressive Hydroengine, such as drowning an enemy by forming a column of water around him. While these powers won’t be a part of the first game’s campaign, a representative for Dark Energy Digital told Joystiq that they would definitely be part of the sequel, which should be finished in a year. Hydrophobia will begin life as an exclusive XBLA title, and should be available for download sometime this year on the Xbox 360.