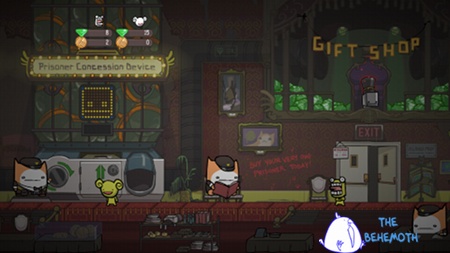 Battleblock Theater is a terrible place, forcing prisoners to perform deadly plays for the entertainment of giant cats. That isn’t to say it’s all bad, at least the prisoners have access to the gift shop.

The Behemoth felt the hero’s back-stabbing greed-driven friend Hatty needed more of a presence in the game, as he only appeared in cutscenes and at certain point during gameplay. Hatty originally ran the Gift Shop’s cash register, but that would make him an easy target for the players. This is why Hatty is currently positioned in an out-of-reach balcony, where he sits in peace surrounded by his wealth as he watches tourists buy all his overpriced merchandise. A video was put together showing Co-Founder and artist Dan Paladin drawing a few iterations of Hatty’s balcony, including one with a bearded cat, before settling on the final design.

It was important to have Hatty in the Gift Shop because it will be the location players visit most frequently. There, players will be able to buy new faces with the gems they collected in story mode. Every purchase gives you a random prisoner, and The Behemoth felt the best way to communicate this idea was to throw all the prisoners into giant gumball machines. Just drop your jewels in the slot, turn the crank, and watch a new character get spit out!

There’s no telling when Battleblock Theater will be released, but at least this list of features tells us what to expect when the game finally launches.