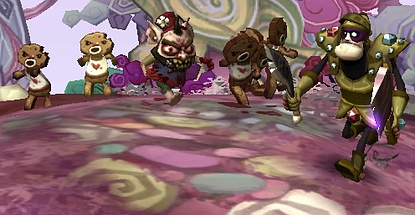 Electronic Arts and Hothead Games announced a followup to DeathSpank today, entitled Thongs of Virtue. The sequel will be available for XBLA on Sept. 22 for 12oo Microsoft Points.

“Bigger, longer, harder – these were the words that drove us while we created the follow up to our introduction to the DeathSpank universe,” said Vlad Ceraldi, Director of Game Development for Hothead Games. “In T.O.V., we’re taking action RPG fundamentals and adding loads of new creatures, environments, weapons and characters, while continuing to push the envelope with our signature humor.”

That “signature humor” is undoubtedly true, if DeathSpank: TOV’s plot is any indication – TOV has DeathSpank searching for and destroying six mystical thongs that grant its wearer great powers. A long time ago, when nine mystical thongs were planned to bring balance and harmony to the universe, a marketing mishap occurred resulting in only six thongs being produced, which was of course disastrous. Now any who touch them become corrupted, except for DeathSpank, who is too heroic to be justiceded by evil thongs.

Local co-op will also be included as it was in the first game, and will also introduce a new character named Steve, DeathSpank’s partner in crime.

Check back soon for more news updates on this new DeathSpank sequel, and also visit the game’s official website for more information.