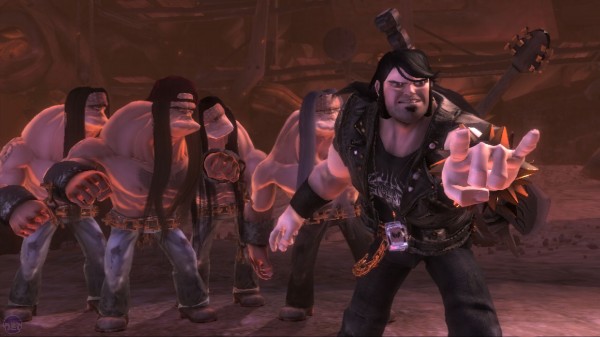 Double Fine is offering Iron Brigade players an item pack featuring items based on its 2009 game Brutal Legend – and all they have to do is sign up for a newsletter.

The pack includes three items – a roadie jacket, a metal mullet and a flame paint-job for in-game trenches. In order to receive the pack, players must sign up for Double Fine’s Iron Brigade newsletter, free of charge. The Rise of the Martian Bear expansion pack is required to utilize the items.

Iron Brigade is a tower defense game which incorporates third-person shooter and role-playing elements. The game put players in control of a mech called a “trench,” and tasks them with defending a base against enemies called Monovisions. Released in June of last year, Brigade was the last of three downloadable titles Double Fine developed between 2010 and 2011, preceded by Costume Quest and Stacking. Rise of the Martian Bear released at the beginning of this month and added a new campaign, items and maps.

Brutal Legend was the studio’s follow-up to its cult Xbox hit Psychonauts. The game starred Jack Black as Eddie Riggs, a roadie who is transported to a mystical, heavy metal-themed world; once there, he discovers he may be the only one able to rescue humanity from the clutches of a glam rock tyrant. Gameplay is primarily action-based but features many real-time strategy elements as well. The game released on Xbox 360 and PlayStation 3 to mostly favorable reviews – Metacritic posts an overall score of 82.

Iron Brigade is available on Xbox Live for 1,200 MSP. The expansion pack, Rise of the Martian Bear, runs for 400 MSP. The game is rated T for Teen by the ESRB.