The first pair includes the classic character Claire Redfield finally returning to another Resident Evil game as well as the newcomer Moira Burton. Both Claire and Moira have been kidnapped been stranded on a remote prison island with a bunch of unfriendly creatures. Claire and Moira have to work together to escape a desperate situation.

The second pair features another classic character, Barry Burton, coming to find his daughter on a remote prison island after receiving an SOS signal for help. While on the island, he finds newcomer Natalia Korda who seems to have unusual powers.

Who is the culprit responsible for all of this?

In the November issue of Game informer, Capcom mentions, “You won’t recognize this character just by the voice, but this is a known character that’s very important to the RE universe, But you’ve got to be a core fan to know her. Really hardcore.”

Only time will tell. Leave your guesses in the comments. It’ll be fun to see if anyone guessed correctly once the game comes out.

In other news, the popular Raid Mode is also making a return from the first Resident Evil Revelations. Two confirmed DLC characters include fan favorites Hunk and Albert Wesker. 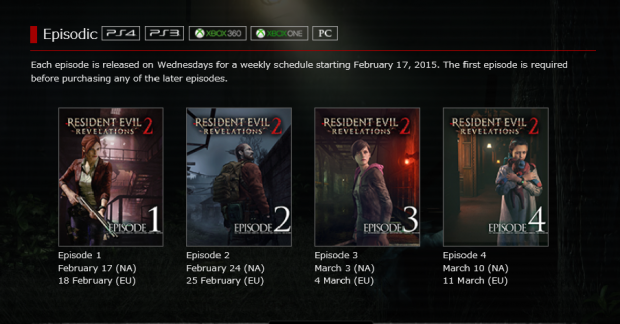 A season pass containing Episodes 2-4, two extra episodes and the popular Resident Evil character Hunk for Raid Mode will also be released, but the price is unknown at this time. This will most likely be used for the Xbox 360. 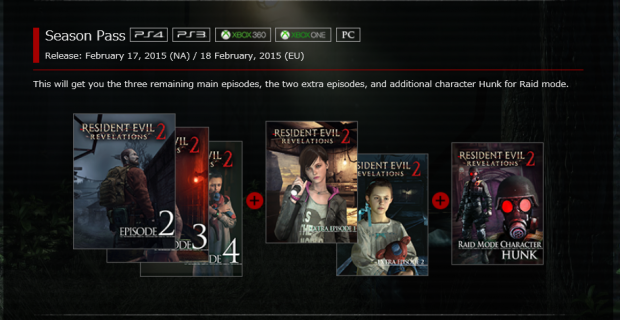 A complete season can be purchased for Xbox One featuring Episodes 1-4, two extra episodes and Hunk for Raid Mode for $24.99/£19.99/€24.99. If the complete season is pre-ordered, Capcom will throw in the Raid Mode Throwback Map pack for free as well.

A disc version of the game is planned for retailers at an MSRP of $39.99 and featuring the complete season content and more bonuses like the character Albert Wesker for Raid Mode. Gamers who plan to buy digitally will be happy to know that these bonuses are available to purchase separately.

To end this news post on a fun note, take a look at the original extended concept teaser for Resident Evil Revelations 2 that was released back in September of 2014. Why this trailer? It’s full of Resident Evil references, and Capcom only just a few days ago revealed every Easter egg in the video. Try to see how many of them you can spot.

This is a condensed but explanatory list from residentevil.net. Some of these were very easy to overlook at first.