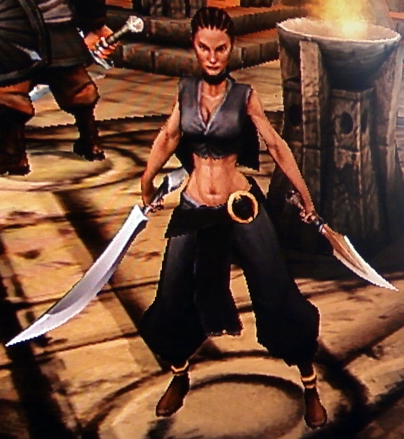 The Assassin is fast and cunning, using her ability to strike quickly before the enemy knows what has happened. Equipped with a short sword and a dagger and combined with ninja like speed she becomes a deadly weapon. She may be an assassin by trade, but seems to not have let it effect her heart. She is the driving force behind everyone sticking with the Wizard on this journey of destiny.

When it comes to soloing, the Assassin needs the most balance in terms of skill progression. Having no stun will result in being overwhelmed, and no melee power means killing enemies will take forever, and no ranged means no way to kite mobs. However, the Assassin is the absolute best at taking out elite units, making her approach to most encounters sort of the reverse to that of the other classes. Taking out the big annoying guys with a sufficiently upgraded B (it’ll cause explosions that knock enemies down) combined with stun and a powerful backstab is a fantastic method to making encounters easier. Be careful when backstabbing though as sometimes the length of the animation can get the Assassin hit by a quick attack. On top of that, her melee only hits one enemy, so trying to meatgrind mobs to death won’t work, much kiting is necessary. A fluid mix of X, Y and B will lead to victory.

Again in true unorthadox style, the Assassin unlike the other classes plays pretty similarly in coop and in solo. Taking out the elites really helps the team, and using the immense range of her stun will make the Assassin incredibly useful. Also bringing weapons which have status effects will make the Assassin a really helpful asset when it comes to mowing down mobs. Tossing a couple poison daggers at fodder or using electric daggers to backstab ranged units take proper advantage of the Assassin’s, well, assassination style. Just be careful not to drag the screen when going for fall off kills.