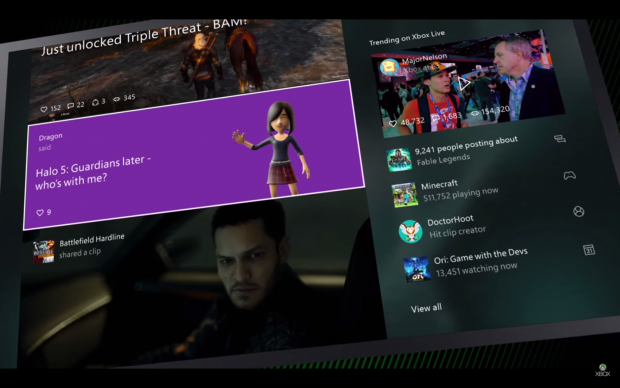 The Xbox One is to get a completely redesigned user interface this fall. Microsoft are making some big changes to the overall design to ensure that gamers have a faster and more intelligent experience. Some of the most notable changes include a redesigned Home and Guide and a new Community section which expands upon the current Friends section with an Activity Feed and What’s Trending, so gamers can access their social activities faster and more easily.

The update will also see the return of Xbox Avatars and introduce a new personal assistant for your Xbox One in the form of Halo’s Cortana. Using some impressive voice recognition, Cortana will assist you to navigate Xbox Live more quickly. In the below video, Microsoft’s Richard Irving demonstrates setting up party invites and recording and uploading DVR clips without even pausing gameplay.

Cortana is set to work across Windows 10 PCs, tablets, phones, Xbox One, and in addition iPhone and Android phones, so gamers could even set a reminder on their phone whilst out and about, to receive on your Xbox One when you log on at home. Cortana will launch first in the U.S. and the U.K. on Xbox One this fall.