Bridge Constructor Portal review: This was a triumph

Bridge Constructor Portal review: This was a triumph

The Portal franchise is the only one that seemed to avoid Valve’s curse. While it also never had a third game, it still lives on to this day through licensed spin-offs and cameos that outnumber the series proper. Antagonistic AI Glad0s has belittled poker players, pinball wizards and Lego builders since her last appearance in a mainline entry, and seemingly won’t stop until she’s narrated every game imaginable. For her latest trick, she’s now performing tests on construction workers in Bridge Constructor Portal, where subjects must build structures guide forklifts through the hallowed chambers of Aperture. It’s a far cry from her usual testing initiatives, but sometimes you got to mix things up. For science, of course. 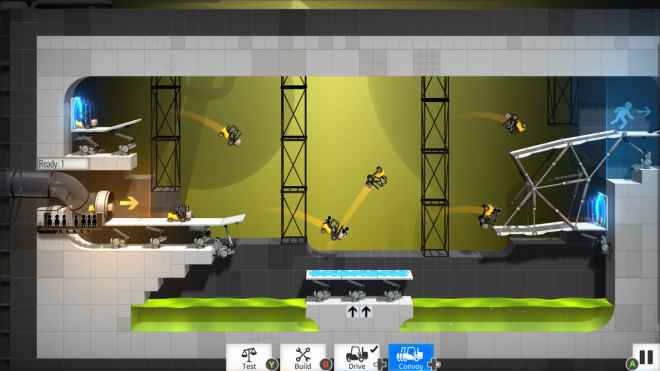 Obligatory portal meme – Full disclosure: Portal is my favorite game of all time, bar none. I’m always down for a trip to the enrichment center, so it doesn’t take much to appease my fandom. That said, I was impressed by how good the Portal aspects of the game were. This isn’t just a graphical coat of paint – they actually adapted loads of mechanics from the originals into this game. I’m not just talking about the obvious use of the titular wormholes, but there are turrets, gel, buttons, boxes… pretty much everything, all with roughly the same function and featuring actual puzzles built with them in mind. Then there’s Glad0s, performed as always by Ellen McLain, who guides you through the game. Her nihilistic wit is just as sharp as ever, featuring some great laugh-out-loud material. It can lean into pleasing fans a bit too much at times (why are all cubes companion cubes?), but for the most part the game feels like a natural extension of the franchise.

Building bridges – Hitting all the right Portal notes is fine and dandy, but there’s a reason it’s the last word in the title. You won’t shoot a single portal in the game, as they’re already placed for you. This is a Bridge Constructor game through and through; every level challenges you to build a structure so AI-driven vehicles can reach the exit safely. You only need one vehicle to reach the end to progress, but you can also send a convoy through a level for extra credit. Bridges are built using a combination of beams and support cables, tethered into place using preset anchor points. Unlike the original Bridge Constructor you won’t have to worry about material types or expenses, which is good because test chambers are challenging enough without the extra variables.

New testing initiative – What makes the game great is how it actually requires the mindset of both of the games it mashed together. Obviously, you need to know how to effectively construct sturdy bridges and ramps. You also need to know how physics are transferred between portals, figure out how to get cubes on buttons and avoid or destroy turrets before anything enters their line of sight. And you have to do this all without your vehicles crashing into hazards or each other. Convoys add another interesting layer to these puzzles, as the way you get a single car to the exit won’t always work for multiple. The game does a good job of slowly introducing new puzzle mechanics, and it even has a cheat sheet on how to build good bridges. Challenges can get pretty busy and require lots of trial and error, but when you got ten acrobatic forklifts effortlessly crisscrossing paths and narrowly avoiding high-energy pellets, it’s a mesmerizing feat. Regular contractor – If you played any of the previous Bridge Constructor console releases, don’t expect things to have changed much. The control scheme is perfectly adequate, but feels clunky compared to the intended mouse or touchscreen controls. Building goes slower using a controller, and the cursor snapping to joints can be frustrating. The physics feel good and logical, although they’re occasionally prone to failure or head-scratching conclusions. For example, vehicles occasionally glitch into bridges or get stuck teetering on the edge of a portal. There have been times moving one support beam a hair was the difference between an unparalleled success and the bridge violently exploding. The most consistently frustrating are the physics of the high-energy pellets, which are so precise it makes it difficult to direct a pellet in an exact direction.

Are you still there? – At the start of the game, Glad0s is there to guide/harass you through every test chamber. As you make your way out of the tutorials she starts appearing less and less, only showing up sporadically in the back half of the game. Her interjections were a welcome reprieve between levels, and the closest thing to a narrative backbone the game had. Without her, a long stretch of levels feels a lot more lackluster. Getting her to appear in all 60 levels would probably be asking too much, but having her in less than half is pretty disappointing. I’m glad we have another good Portal-adjacent title. Bridge Constructor Portal perfectly combines aspects of both games to create something uniquely challenging. It’s obviously a pick-up-and-play casual game that’s not quite at home on consoles, but the gameplay at its core is great nonetheless. It would still be a great game without the Portal aesthetic, but it wouldn’t have made me smile nearly as much.

Bridge Constructor Portal was developed by ClockStone Studio and published by Headup Games. It was released February 28, 2018 for $14.99. A copy was provided for review purposes.

From the mind of Portal comes Quantum Conundrum

Read More
From the mind of Portal comes Quantum Conundrum