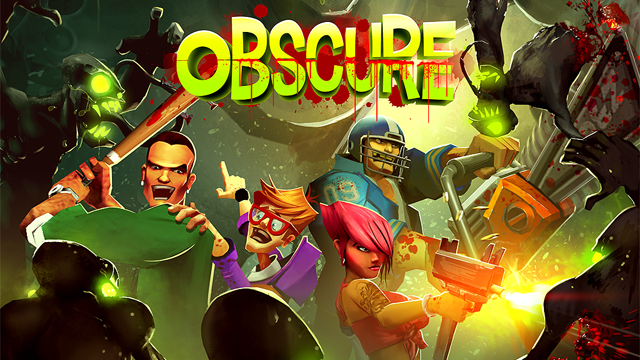 Focus Home Interactive has officially announced Obscure, a new 2.5D side-scrolling action title set to hit Xbox Live later this spring. Set in the same universe as 2005 survival-horror title, ObsCure, and its 2007 sequel, players will find themselves taking on the role of four students who must slash, bash and blast their way through hordes of gruesome monstrosities. Casting aside the doom-and-gloom atmosphere of its namesake, Obscure touts highly-stylized, blood-drenched animation, caustic humor and arcade action that emphasizes combos and chain attacks in order to multiply your score and rack up points.

Each playable student-character comes with their own unique skills and abilities, enabling you to tackle each non-linear level and grotesquery in a variety of ways. Along the way players will complete objectives, discover new weapons and encounter a bestiary of horrors; earning experience to level up their characters by excelling above the score goals, which can then be spent on more abilities, skills and weapons. At any time players will also be able to backtrack through completed levels, bringing along their newfound prowess and unlocked arsenal in an effort to best their old scores.

A vital part of any high school experience, Obscure aims to deliver on a robust social feature set. Up to 4-player cooperative multiplayer, online and local, means players can split up to more quickly complete their objectives or band together to increase the odds of survival.

Obscure is being developed by Mighty Rocket Studio, an independent developer comprised of some of the original ObsCure development team. To see the angsty teenage gorefest in action, hit the jump for the official teaser trailer.