We’ll always wonder what it’s like to take fly among the clouds like a bird, to defy these wingless bodies we’re cursed with and soar through idyllic skies. Few among us could resist an offer to do just that, and fewer still if the offer involved doing so in a calming and beautiful world of levitating islands. That’s why I found myself playing AER at PAX East a few weekends ago. Well, that and the fact that Forgotten Key’s literal flight of fancy looks to me a heck of a lot like 2011’s excellent The Legend of Zelda: Skyward Sword, which is a guaranteed way to grab the attention of someone who’s been enjoying Nintendo’s Zelda series since the ‘80s.

In AER you play as Auk, a young girl on some sort of pilgrimage that sees her exploring a world made up of land masses floating across the sky. Auk is clearly the right pilgrim for the job, seeing as she can turn into a bird and fly on a whim. Skyward Sword also featured a young kid living on a floating island who departed for a great journey, and while that series’ Link couldn’t turn into a bird, he could fly on the backs of giant Aves — thus the parallel I drew. As it turns out, though, while Zelda was the right series, I had the wrong game.

“I wouldn’t say Skyward Sword is an inspiration, because none of us who made the game have actually played that game,” explained Forgotten Key CEO Robin Hjelte. “But Zelda in itself — especially Wind Waker — has been a great inspiration.”

Wind Waker was infamously derided by longtime Zelda fans upon announcement for looking too much like a game for children. Of course, once everyone played it, all but the most stubborn cynics recognized it as an achievement in both art and gameplay. And, upon closer inspection, the similarities between Link’s 2002 GameCube adventure and AER are clear.

You don’t have to be a Zelda fanatic to be drawn toward it, either. For any gamer who likes exploring, Hjetle promised that there will be plenty to be had in AER. Auk’s expedition starts in a cave where players will encounter a shrine to a legendary priestess who once saved the world.

“But as you progress out of [the cave], you’re completely free as soon as you’re out of it,” said Hjetle. “You don’t even have to go to speak to the next person or any of it. You can go wherever you want, but there [is guidance], of course.”

It’s true enough. A single button press transforms Auk into her feathered form and sends her skyward. From there you can flap your way toward any of the many islands seen floating in the sky. The flying is fun enough, particularly because of the wistful feelings inspired by picturesque setting. But AER isn’t the first pretty flight video game, so it wasn’t long after soaring between islands dotted with various trees, shrubbery and lakes that I was wondering what else it had to offer. One island had a few villagers and homes, but there still didn’t seem to be a whole lot to interact with.

The demo was brief and on a timer, yet I still felt bored long before it was over. I couldn’t help but wonder if there was anything else to do in AER, or if there was even anything worth doing. Hjetle soon set me straight though — I apparently left more than a few stones unturned during the demo.

Hjetle later explained that it was possible to come across a temple in a cave and progress most of the way through it before the timer ran out. “There are puzzle elements, and there are all different kinds of challenges. It’s about finding and understanding the information that you’re given, but also solving more logical puzzles such as trying to figure out the right symbols.”

While Hjetle said AER is heavily focused on “atmosphere and aesthetics,” he also promised “a lot of storytelling.” I’ll have to take his word for all of that, because I didn’t get the chance to do much of anything but travel — by wing and by foot — and briefly talk to some NPCs.

If Auk has to fly across this fractured world, exploring temples and solving puzzles along the way, then surely she must be on a quest to uncover how the world came to be splintered into all these flying islands, right? Nope, wrong again.

“They actually know what happened,” Hjetle said of AER’s denizens. “They know it was an event that happened that made the world break apart, and they know that this priestess Kara was the one who saved the world from total destruction, and therefore they follow her ways. In the beginning it’s not really that goal, but as you progress through the game you notice there’s some kind of aftermath from that event that’s kind of still lingering, and that might destroy the world in the end, so it’s that you want to stop.”

Hopefully Forgotten Key can indeed deliver more than just peaceful flying. And, to be fair, the latest trailer does show some of the puzzle-solving and dungeon-exploring that Hjelte referenced. It’s not possible, however, to form an opinion on any of it without having been able to experience it firsthand. All I can say for certain, is that if that aspect of AER doesn’t prove more compelling than my demo did, most players won’t end up stopping the end of the world like the priestess of legend — they’ll just be stopping. 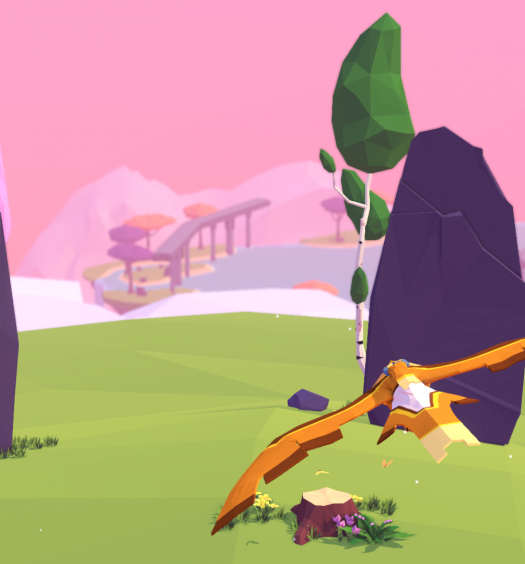 Experience the joy of flight with new AER trailer