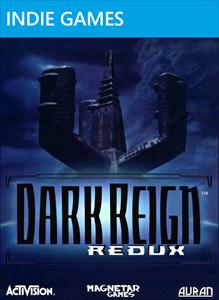 This cover surfaced earlier today and shows Dark Reign Redux, a previously published PC title, coming to Xbox through the Indie Games channel. What’s interesting about this cover is that the 800 pound gorilla publishing company Activision is apparently behind it. This would mark the first entrance to XBLIG for the company behind the Call of Duty franchise. This box art matches a cover for Dark Reign a real-time strategy (RTS) game originally published by Activision to the PC in 1997.

Activision is utilizing Auran for publishing support for Dark Reign Redux. According to their website this is the company’s first published game. The game will use the “revolutionary ‘Tactics Engine’ developed by Auran”. The website goes on to say that “Dark Reign features some of the most incredible technology seen in a strategy game to date” and “gives players an amazing level of detail and customization never before seen”.

To help develop the game is Magnetar Games a “primarily research-oriented developer” who has “developed a range of innovative technologies aimed at enhancing the game and simulation development paradigm.” Pick the game up here.

“Dark Reign Redux is a modern remake of the classic 1997 real-time strategy game Dark Reign: The Future of War. Humans have fled a toxic, dying Earth to live in newly established colonies spread out across the known galaxy. Caught in the middle of an intense battle for power between the Imperium and the Freedom Guard, the Togran race is on the verge of extinction. Only you can change their fate.

Dark Reign Redux is a faithful remake of the original game, maintaining the same look and feel, and incorporating the many innovations that made the original game a top seller. Manage resources, build your army, design your attack, and guide your side to victory.”