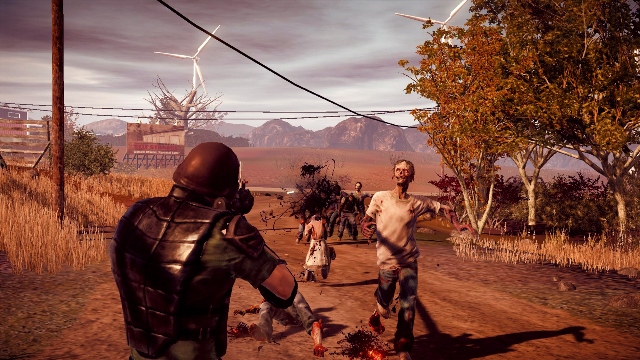 That the phalluses remained hidden until the graphical improvements were applied is a testament to just how far the game’s visuals have come since 2013. Playing Year One Edition at PAX gave the impression that Undead Labs had drawn in additional vegetation, but that’s not the case. Pieces of the environment no longer “pop in as close,” explained Card, “and the textures are more intricate too, so it feels thicker because you can actually see all the details and stuff.”

On top of the graphical leap, Year One Edition also features some other changes and improvements. Card said that his team has made “corrections in places where there were horrible lies in the UI about how it worked — where the mechanic had changed but the text hadn’t been updated. So we did go through and clarify stuff.”

New weapons like an assault rifle with underside grenade launcher and new vehicles like SUVs have also been added. In our playtime with the game XBLA Fans got to ride around in a “Jurassic Junction” SUV clearly inspired by those in Steven Spielberg’s Jurassic Park movies.

Of course, it was difficult to be too surprised by the existence of the dinosaur-themed SUV after Card told us about what used to be jutting out of the game’s background.

Update: Some readers have asked why the penises weren’t discovered in State of Decay‘s higher-resolution PC release. XBLA Fans has followed up with Undead Labs and will update this story should the studio issue a response.