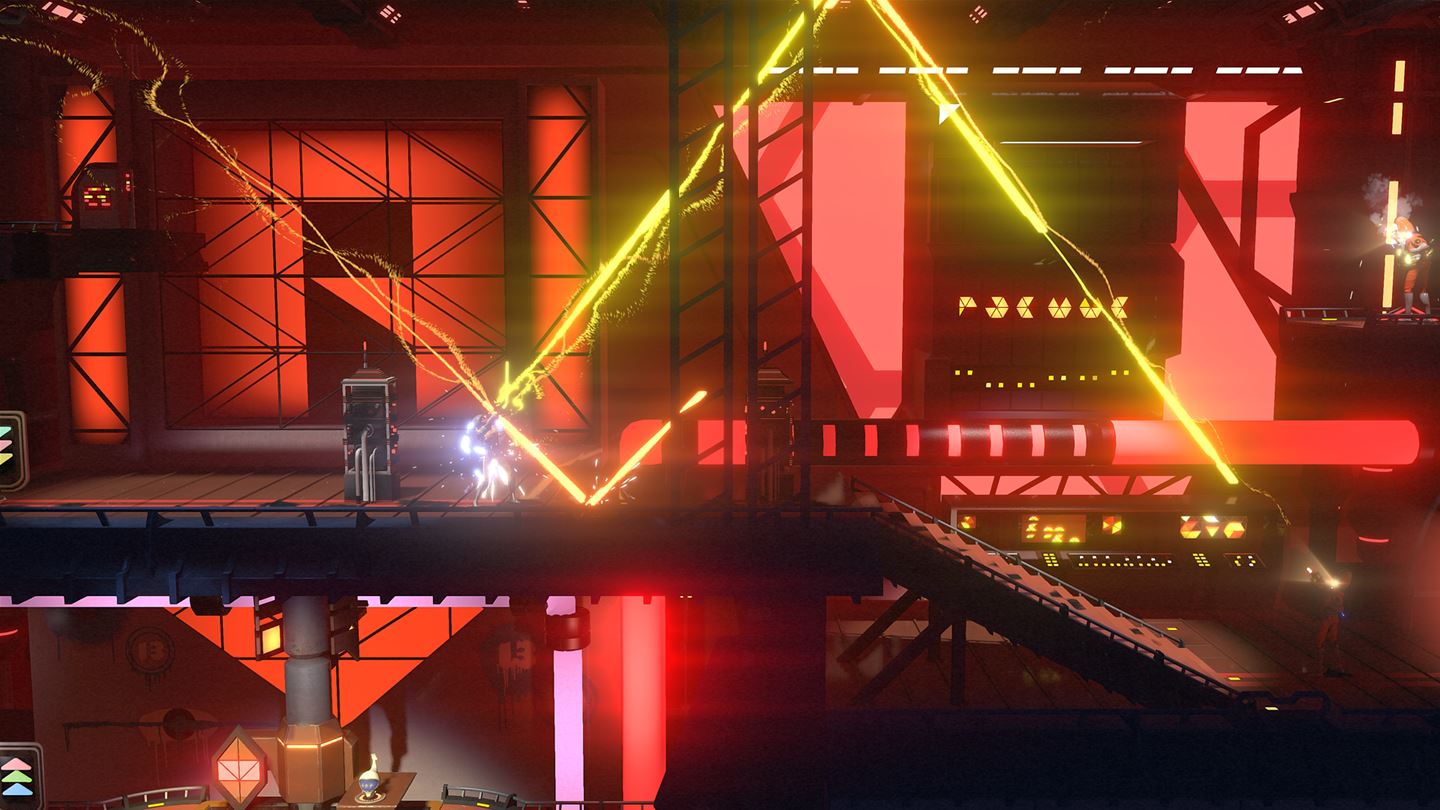 Knowing nothing upon starting Headlander, I didn’t realize that the head chosen at the start was going to be my sole representation of my character. After gaining control of the floating head, I learned that I could rip the heads off other robots and then take control of their bodies to gain access to weapons and the ability to walk. But the fun quickly gains a sense of urgency when the realization hits that you are the last real sense of humanity left and the rest of civilization is essentially stored in a server. They have lost their sense of emotion, and it soon becomes a quest to save the world and discover a sense of purpose and belonging.

To say much more than that about the story of Headlander is certain to be saying a little too much, as the story never grows too far outside of the premise and doesn’t leave a lot of agency for the player to have an impact on the storyline.  However, the story does give way to a beautifully done 2D exploration game which plays off of genre expectations wonderfully. Much like the story, nothing in Headlander is done perfectly, but it does provide for a one of a kind adventure. Clever concept – When the basis of a game is controlling a flying head fighting to save the last form of humanity against an overlord robot, the general concept has great potential for creative ideas. The gag of being “Headlander” is enough to carry the story over the 10 or so hours it takes to complete the game. The writing is clever and at some points, the game is laugh-out-loud funny. The creativity seen in the story is also apparent in other aspects of the game, such as the upgrades which help craft a satisfying rate of progression.

Exploring – Headlander is 2D exploratory platform game, often referred to as Metroidvanias, and it really does the genre justice. This means that as players explore the area, they find new upgrades and areas that can’t be entered without certain abilities. When done poorly the experience  grows quickly tedious, however, Headlander pulls it off masterfully. Finding upgrades and slowly filling out the gigantic map after hours of exploring is a fantastic feeling. The act of exploring also plays off of the story and provides a way for Headlander to escape thinking about who he or she is and who they were meant to be.

It’s really enjoyable – I was entertained throughout the entirety of Headlander, not only because of the clever concept and excellent genre execution but because it was a whole lot of fun. Combat was usually a fun distraction from unlocking new powers like turning heads into grenades and turning into impenetrable goo and exploring. The narration and other characters all provide some decent jokes along the way as well. It was the little things that made Headlander an enjoyable experience, like upgrades that visually enhance the character and a rousing musical composition. 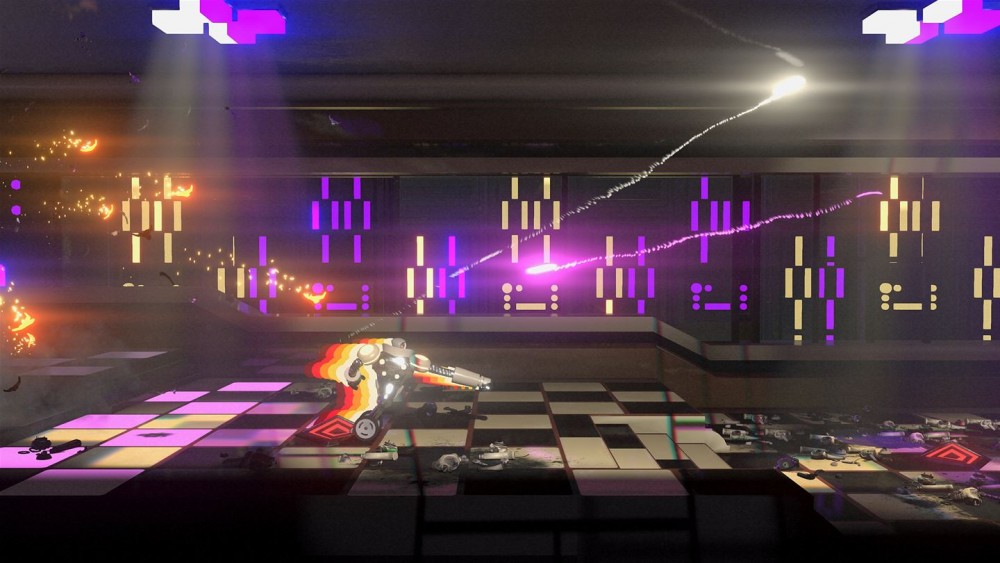 Half-baked ideas – For as much creativity and promise Headlander showcased, it also served a lot of half-ideas and lackluster execution. There was one section of the game that was set with a sort of battle chess aesthetic and seemingly was going to introduce some interesting new characters and set pieces, however, that isn’t quite what happened. The “chess pieces” are slightly reskinned versions of characters already seen and the gameplay is little more than running from point A to point B in a rather confined arena. The ending of the segment is fairly memorable but the humdrum journey to get there holds the segment back and is indicative of other segments throughout Headlander. Much like the reskinned chess pieces the world of Headlander never bothers to differentiate itself in a meaningful way. As such, the entire journey feels very contained.

Lack of satisfying puzzles – If a puzzle isn’t challenging in a compelling and unique way then it becomes a meaningless slog that doesn’t encourage any real thinking. These sorts of puzzles are better left out of games entirely, as they feel implemented only as a way to eat up time. Having to discover a specific spot in a room to angle the shot from a gun a specific way to bounce off a set mirrors is barely enticing the first couple of times. Sadly this overused main puzzle type of Headlander quickly becomes a dreaded regular occurrence. As a whole, Headlander almost never offers really satisfying puzzles so those looking for a game that really forces players to think outside of the box may want to look elsewhere. 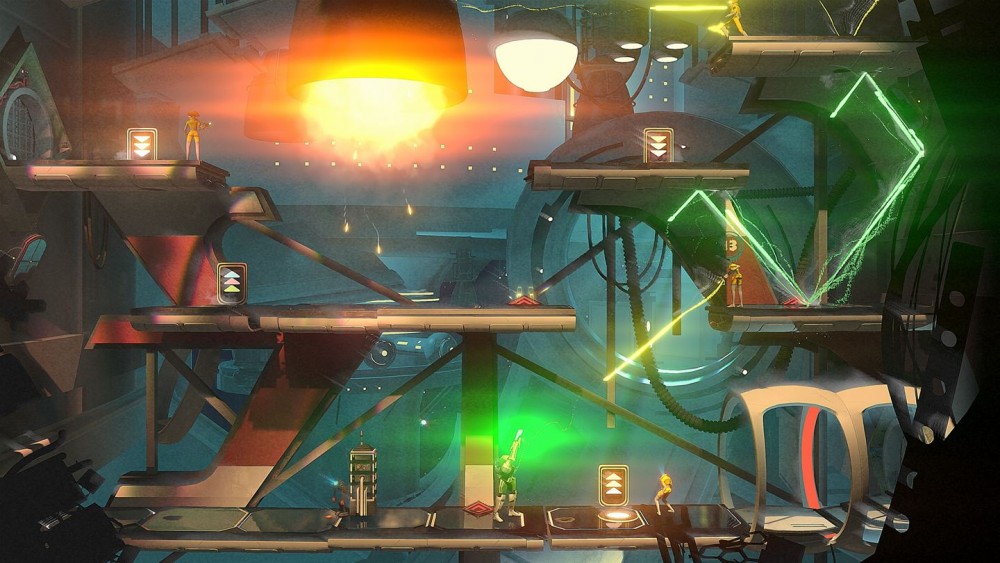 Headlander is a really fun game for those looking to scratch a Metroidvania itch, however, those looking for a revolutionary new take on the genre should know that they won’t quite find what they are after here. Instead, they will find a competent game that excels at the basics and offers a number of laughs and sources of wonder. Playing as a floating head taking over control of the bodies of random robots is a journey I had yet to go on before Headlander, but I sure am glad I did.

Headlander was developed by Double Fine Productions and published by Adult Swim. It was released on November 17, 2016, for $19.99. This copy was provided for review purposes 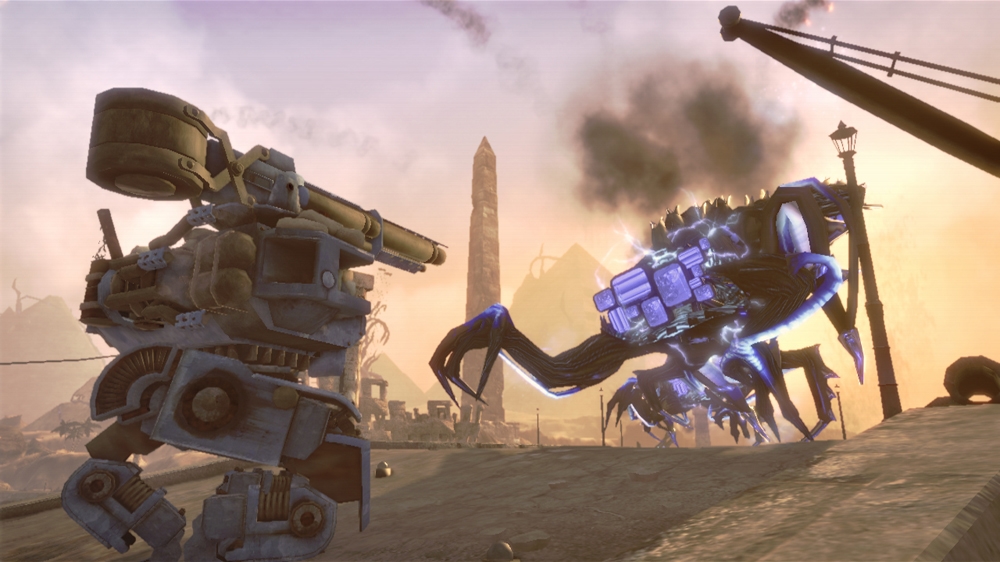