Mutant League Football isn’t your dad’s football game.  The game is set in a post-apocalyptic world where football is as much about war as it is about sport.   Hazards such as mines and volcano pits litter the field, and players can be hurt or even killed during a game.  It’s a comical mix of Fallout, Saturday morning cartoons, and American football. 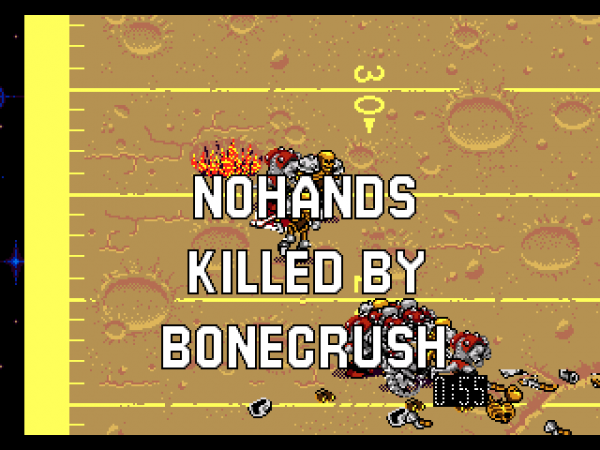 How many football games let you permenantly take out opponents?

HD makeover – Some classic titles would be a perfect port as-is, some could use a transition to three dimensions.   Mutant League Football falls under the latter.  Having Madden-esque camera angles, play-by-play announcing by a mutant announcer, and more complex AI would definitely make this game a day-one purchase for several players.  And since both Mutant League and Madden are owned by Electronic Arts, the Madden engine could easily power it.

Classic gameplay – Everything about the game oozes charm, but remakes sometimes totally reimagine how a game should be played.  Nothing aside from some basic Madden mechanics are needed to bring the game to present-day standards.

Teen-rated visuals – Dead Space this is not.  Nothing could ruin this game more than going ‘next-gen’ with the gore.  Part of the charm of the game are the cartoony gibs and gore.  Nothing more than a Quake II-style gibbing is necessary to paint the picture.  Any more than that and the game loses its charm.

Mutant League Football is a one of a kind game.  It’s a game that appeals to sports fanatics and those who steer away from sports games.  It’s a game that doesn’t have yearly seasons, so there’s no buying a Mutant League ’12 or ’13 each year.  Combine all that with the post-apocalyptic cartoon charm and it’s game that would put a smile on anyone’s face.