First person shooters typically use the right trigger to fire; for various styles of attacks, beat ’em ups often use X, Y and B; Radiant Silvergun has different weapons mapped to A, B, X, Y, left and right bumper and right trigger. In short, its heavy on the guns. Radiant Silvergun, developed by Treasure, will be joining Guardian Heroes (also developed by Treasure) in the Saturn-to-XBLA port ship. Much like Guardian Heroes, Radiant Silvergun also has some older mechanics that work surprisingly well despite being difficult to acclimate to.

The game is an old school fixed aim (meaning no aiming with the right stick) shoot ’em up with one big gameplay feature that will draw lovers of the genre to it like zombies to a family trapped in a basement: the weapons. Shoot ’em ups (shmups) often have a couple of different weapons or shooting styles, switching between a beam and bullets and some upgrades, but Radiant Silvergun has all seven of its weapons available for use at all times. The balancing between each of the weapons is also clearly thought out as all the weapons will receive plenty of use based on the situation.

Your ship is equipped with quite the repertoire, and knowing which flashing button to slam, knob to twist, or lever to pull isn’t always easy, especially not for your first time. Remembering which button does which weapon is already difficult, but knowing when to use which weapon is a far greater horde of space ships to destroy. At first glance Radiant Silvergun seems like absolute chaos, random weapons, random enemies, do anything and success or failure will come depending on if the game feels benevolent. Upon further review, that’s most certainly not the case. 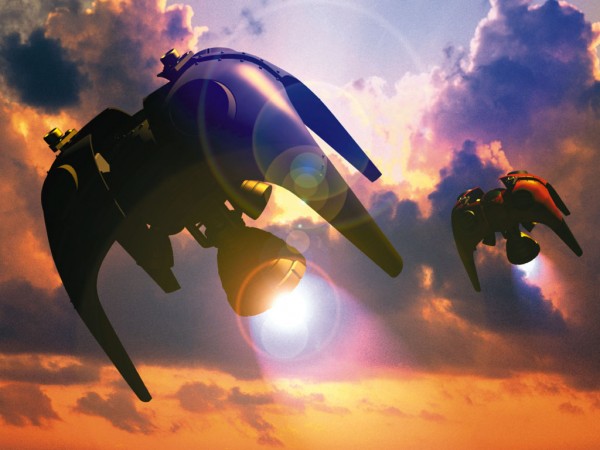 The level demonstrated at Comic Con consisted of two main parts: one part big floating apparatus of encroaching doom and one part flying robotic snake boss. Enemies came from below (they’d rise up to the plane on which we was fighting), the sides and the top in classic shmup style. However, the massive construction which constantly thwarted mobility effectively negated the utility of certain weapons. For instance at one point we were being rushed from the sides by enemies, so we dashed upwards to the top of the screen and were forced to use the backwards firing bullets to return to safety. At other times, the action was so close to the ship’s dashboard that the mixing between the lock-on laser and the sword was the only way to survive.

The boss fight was a little more straightforward but inhibited movement similarly to the massive construction (we wish we had a name for it). However unlike the gameplay leading up to that moment, the obstruction now also went off screen and used a couple of different (though basic) attacks. After each section of snake was destroyed the boss exploded in a plume of… explosion, and the level was complete. 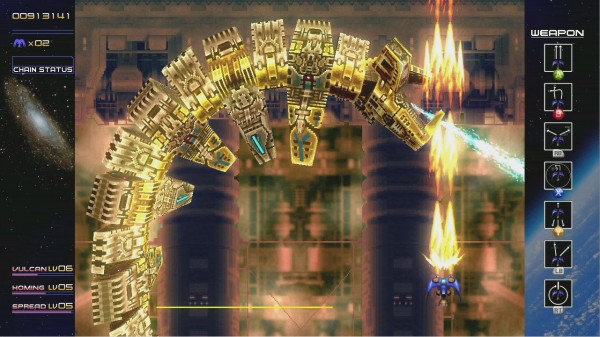 While the boss battle was less thrilling than the action leading up to it, both delivered satisfying shmup experiences. Having seven weapons available at all times seems overwhelming at first, but eventually players will learn to identify key weapons for use in different situations. Each of the weapons have their uses, some specific and some more general gameplay style, and they’re each satisfying in their own way. The constantly moving obstructions throughout the level provided a lot of chaos, demanding constant changes to the battle plan and forcing movement rather than allowing the ship to stay at the bottom of the screen.

Level design and encounter scripting will play a big part in the success or failure of this game. For fans of the original it’s the same exact thing, so those people will most certainly not be met with disappointment as nothing has been changed except the controller, graphics, and now the screens are wide enough to fit a weapon legend on the side of the screen (which was very helpful). Fans of shmups will most likely enjoy this very different take on the genre due to its peculiar approach to weaponry. However, the shmup level is quite high here, Radiant Silvergun bamboozles the player and forces them to make many on-the-fly decisions, so those cautious of the difficulty should tread lightly.

According to the Microsoft people present at the event and the demo-over screen (there were no Treasure employees present) there will be online and couch co-op for two players, some different modes and a graphical overhaul. There are tons of shmups all over XBLA now, so if this game has you intrigued, check out Bangai-O HD (another Treasure shmup).