The game is set in a post-apocolyptic world where four mercenaries have found themselves banding together to combat the evil military reign of the Alliance. Stages are selected in an overworld-style format and each provides a payout that player can use to purchase equipment. Logistics for the team are handled by the team’s overly voluptuous secretary who also serves as the intelligence officer. Gameplay is the typical room-to-room flow with varying enemy types. 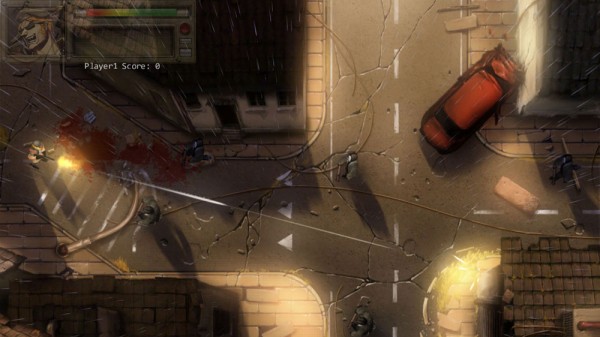 Great core gameplay – One thing Alpha Squad does really well is to add some variance to the standard twin-stick formula. Enemies drop currency which can be used at any time to buy weapons, armor or health packs. The gratuitous amount of blood can be turned off in the options menu. The exits to any given screen can be color coded in the options menu — a nice feature when the environments vary. It’s the little things that weren’t forgotten that give the game extra appeal.

Strong visuals and audio – The music for the game was composed by Stemage of the Metroid Metal music fame. It’s heavy, loud, and fits the game well. The sound effects also work well, though they aren’t anything to write home about. The visual presentation, however, is the crowning jewel. The menus feature anime-styled characters that come from professional artists. Gameplay visuals are also nice, with a next-gen look to the environments.

Multiplayer focus – Alpha Squad has a great multiplayer component. In fact, the entire game is centered around grouping together with three others to take down enemies. From the way the menus are driven to the fact that the squad has four distinct members it’s clear that it was built to play with friends. 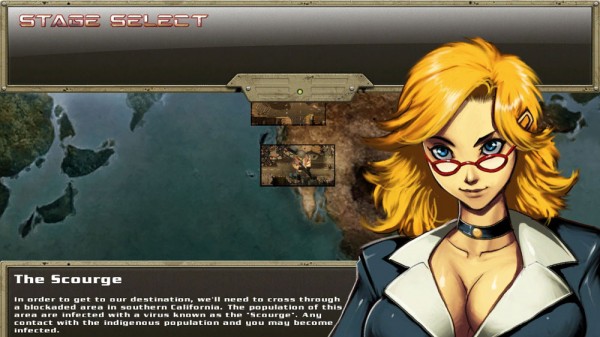 Uses tired gimmicks – One of the biggest downfalls of the game is that it relies far too heavily on the clichés that plague video games. For example, while the anime-style art is impressive it’s far too overdone in games today. Additionally the fact that every female character has enormous breasts that look like they’ll break out of their clothes should she breathe out is disappointing. We’re sure every teenage boy will look at the game for the cleavage, but in the end that doesn’t guarantee a purchase. At least it didn’t cash in on the most recently overdone cliché, zombies.

No adaptive difficulty – While playing through in single player we found sections of the game to be nearly impossible. On the inverse four player multiplayer seemed far too easy. As near as we could tell the game did not balance itself based on the number of players present. 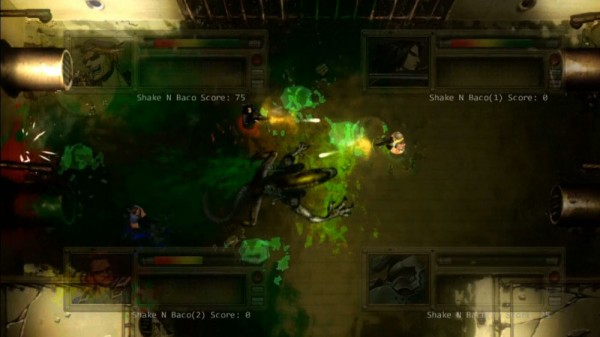 Alpha Squad is a solid twin stick shooter that will satisfy any fan of the genre. Casual gamers will likely find it appealing too, but be warned that the difficulty is much higher when playing alone. If it weren’t for the difficulty and reliance on overused video game staples it would be a title we would recommend to everyone. As it stands this is a must have for twin stick fans while others will definitely want to play the trial version before deciding.