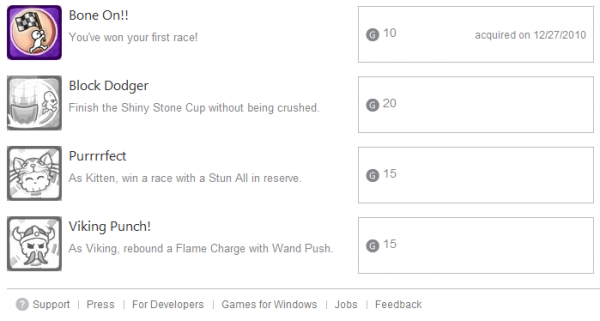 The recently released XBLA game Raskulls might have some DLC in the works. This weekend, a friend compared his achievements in Raskulls to mine, and saw some achievements I don’t have. Immediately I replied, that’s absurd because I have them all! (I love Raskulls) I compared my games to his and there they are, three shiny new achievements!

– Block Dodger 20g: Finish the Shiny Stone Cup without being crushed.
– Purrrrfect 15g: As Kitten, win a race with a Stun All in reserve.
– Viking Punch! 15g: As Viking, rebound a Flame Charge with Wand Push.

We have no idea how these showed up in his comparison, but there they are and they suggest two new Raskulls: Kitten and Viking (likely as seen in Mega Quest) and a new set of maps to race on: the Shiny Stone Cup. There’s been no announcement from Halfbrick regarding this DLC pack, so no word on price or date or any other content yet. However, if you check your Raskulls achievements on xbox.com you’ll notice they all show up there.

This DLC pack will bring the total gamerscore for Raskulls to 250g and 15 achievements.

UPDATE: Raskulls Reinforcements 1 DLC packed dropped this morning for 240 Microsoft Points and includes four new Raskulls: Viking, Kitten, Astronaut and the Pirat Henchman (his taunt is a fart, haw haw). Along with the new Raskulls is the Shiny Stone Cup. 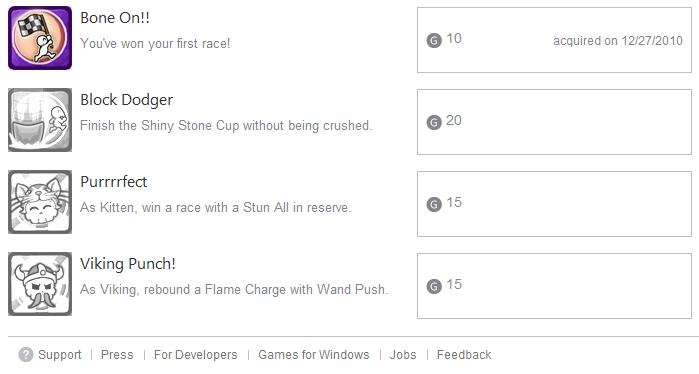