With the release of Renegade Ops earlier this year, the name Desert Strike was name dropped a lot. In reality the games aren’t all that similar, but the few times you get to fly a chopper around reminded many of the long forgotten series.

Most remember the first game in the series Desert Strike: Return to the Gulf, which put players in control of an Apache attack helicopter. However there were actually five games in the series, with a sixth planned but ultimately cancelled (though it morphed into Future Cop: LAPD). The 16-bit era Strike games, Desert, Jungle and Urban were all fairly similar with the only changes being settings and the ability to pilot other (ground based) vehicles in the latter games.

With the jump to the PlayStation the core gameplay of the series remained the same but Soviet and Nuclear Strike boasted live action FMV. Of course this was all the rage at the time, usually looking extremely low budget and coming off as incredibly cheesy. While the FMV in the Strike games was a little cheesy and the acting slightly hammy, it was very well produced and often extremely effective. A lot of the praise goes to the fact they used FMV for everything, meaning you could look up videos on every enemy, weapon or mission objective. Even now we often have to trawl through a huge body of text to find out objectives or even learn how to play the game.

Variety is the spice of Strike – Desert Strike made the Apache a gaming icon, but it’s clear the people behind the series realized it needed more. With Jungle strike and almost every game afterward (Soviet Strike went back to Apache only) the Apache was not the only playable vehicle. There were tanks, Harrier jets, gunships and of course hovercrafts. As fun as the Apache gameplay has always been, it’s always nice to get a bit of variety. We think these sections should be fast-paced action to contrast with the more traditional gameplay of the series. This would also help to vary up the mission objectives, which could sometimes be a little too similar.

Team Strike – Everything is better with co-op, everyone knows that. Why should Strike be any different? Imagine heading out with a couple of your buddies, each of you in different vehicles, tackling different objectives to complete the same mission. Someone has the Apache and goes behind enemy lines to rescue some POWs, another is in a tank clearing an LZ that’s been overrun and the pilot of the hovercraft is racing through enemy territory to come pick up those POW’s. It’d require a ton of teamwork co-ordination but we think it would really compliment the single player experience. Striking pace – Some may disagree with this one, but we don’t think the Strike series would be the same without its slower pace. Renegade Ops was all about fast arcade action, but the Strike series has always been about methodical precision. We want to have to worry about not destroying friendly targets or non-military buildings. While the plot was always a little over the top and pulpy we liked that the gameplay was at least somewhat grounded.

Strike: The Movie – It might have only appeared in the two PlayStation games but we think the FMV in those games made a big difference. The 16-bit games didn’t have much to them plot-wise and what they did was delivered through fairly dull semi-animated screens with captions. Alan Wake’s American Nightmare recently proved you can do a lot of high quality FMV on XBLA without too much hassle. As long as the tone and quality is kept in line with the previous games and doesn’t stray toward Command & Conquer territory we think it’d add a lot to the games atmosphere.

Serious Strike – While it was always comparable to a Hollywood action movie/thriller rather than a realistic document of events, we feel like the series’ more serious and realistic tone needs to stay. We hate to keep bringing it up, but Renegade Ops fills the over the top cartoon action here. Fighting the equivalent of a Saturday morning cartoon villain is all well and good but we want the stakes to seem a bit more real than that. Give us terrorists, foreign conflicts and all that’s in between and maybe throw some conspiracies in there just to spice everything up a little. We also think the conceit of a covert “STRIKE” team from the PlayStation games would work best for this. The idea of the team who have to stop conflicts before they happen is always a fun one. 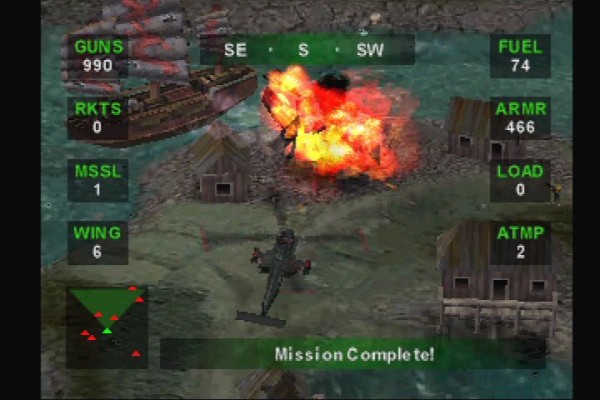 XBLA has proven to be a great platform for many genres that don’t really have a place in retail anymore. Were the Strike series to come back as a full retail product it’d of course be a full on 3D action game, probably with on-foot third person shooter sections. That’s not what we want from a revival of this franchise. We want the same type of gameplay, the same isometric view and the same well done FMV, just with a modern coat of paint.