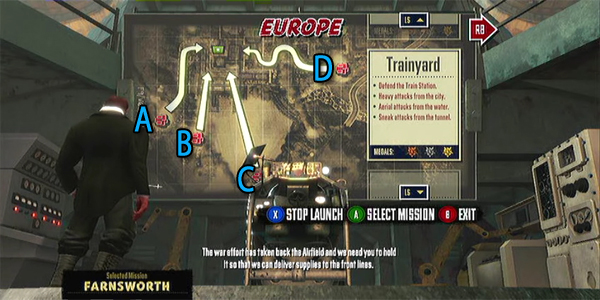 Trainyard can be completed in multiple ways. The only requirement is that players will need to bring flak turrets or flak machine guns to take care of the aerial attacks from B and C, however there will be no aerials until wave 7 so focus your emplacements elsewhere. Other than that, using Mortars to take care of D or using grenade launchers work fine, and shotgun turrets and machine guns will make easy work of A. Use shotgun turrets at the exits of D and A combined with dampening emplacements for safety, and setup two flak turrets in the center.

If you’re using an assault chassis, you’ll have less options here, and it’s strongly recommended you bring machine gun turrets to deal with both land and air enemies; for the engineering chassis, be sure to make up for the lack of support emplacements with mortar turrets. Despite Double Fine’s tips, we recommend just sticking with the Woodruff. Manage each side, using grenade launchers to take down Breakers and other crowded up fodder and machine guns to clear the skies and this will be an easy gold.