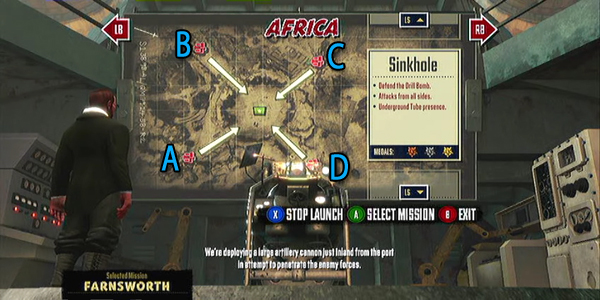 Sinkhole requires quick movement and awareness as the drill bomb is being constantly inundated. The engineering player is the key here, where-as any additional players should be using heavy weaponry from a quickload setup in the corners (if there’s only one Turtle player they may have to move more to be effective). What comes from which conduit is essentially moot, Sinkhole spits out so much scrap it’s easy to keep four MG turrets up at all times. The early game is simple, setup four machine gun turrets at the base of each lane close to the drill bomb (objective). Once they’re setup, you’ve got until wave 5 to upgrade each of them once so they can properly fend off the worm attack and all subsequent worm attacks. No matter what, keep four MG turrets at each lane up at all times, if they’re destroyed replace them immediately. Before upgrading them to level 3, place Cluster Mine Layers at each lane roughly right at the wall/opening to each lane so that the Tommys sit directly on top of them and such that the Burst Transmitters can’t hit your MG turrets without stepping over the mines. All mine layers should be level 2 before upgrading the MGs to 3, then mine layers to 3. Move rapidly to acquire scrap and always sprint when reloading your machine guns. Use the rocks/walls to avoid being sniped, and always always kill worms because they will destroy your investments and eventually hit the base. If you can keep your emplacements running, this pit will be smooth sand-sailing. If you’ve got a lot of scrap, put sniper turrets in the corners.

Wave 2: A Resistors and B Burst Transmitters

Wave 4: B Resistors, Snipers on A

Wave 8: A Burst Transmitters then B then A and C Burst

Wave 9: A Snipers, B Tommys

Wave 10: B Tommys and Burst

Wave 13: B Tommys, D Tommys followed by A and C Tommys

Wave 14: B Burst A Resistors and D Blitzers then B Blitzers

Wave 15: B Bertha then B Knobs, D Bertha C Knobs, then B Bertha and B Knobs