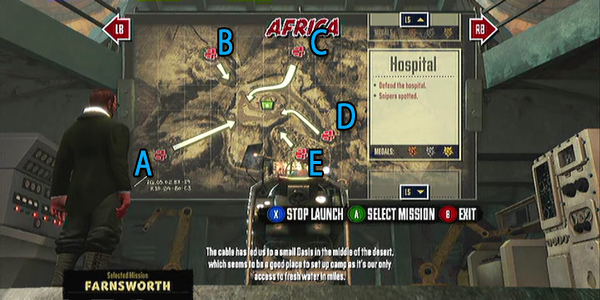 Hospital is not easy. Hospital will be annoying and hectic and one of the most difficult golds to get at-level. However, getting gold will then be incredibly rewarding! If you’ve been saving cash up until now, we recommend busting it out now and buying a top-quality sniper and making sure your emplacements are top level as well. A will be less of an issue than you might think, and should be easy to manage with a well placed Dampener and Shotgun combo. Halfway through the level, add a machine gun up there as well. If you have a sniper turret, you’ll want to put it down early and upgrade it as soon as possible; without being upgraded the sniper turret is garbage. If you don’t plan to upgrade it (it’ll cost about 200 total for an Engineering, 240 for standard, 300 for assault) then don’t bring it with you, use a Mortar instead and have it near the base on both C and D sides. Speaking of which, C and D are what will kill you in this mission.

Focus your emplacements on watching A, C, and D making liberal use of Dampener + Shotgun combos. A couple machine guns towards the middle will cover stragglers and the few arials. Don’t waste scrap on taking out the Snipe Tuners (E and B), use the walls/rocks for protection and take them out when the greater threats to your base are defeated (or at least manageable). NOTE: Big Willie destroys emplacements it walks over, so the dampener you place for A will likely be destroyed after wave eight. Be careful not to place expensive or upgraded emplacements in Big Willie’s wake, as it could lead to defeat (especially solo). C and D will send Blitzers at you to take you out, so make sure to have dampeners there too so your emplacements can cause chain explosions from them instead of making you do it.

Hospital really ramps up towards the end, just remember to deal with Burst Transmitters, Resistors and Tommys above all else, Snipe Tuners can be avoided for the most part and should be. The Volt Dropper should be taken out swiftly or it’ll cause problems when the double Willies come out on the final wave. Having a second player really, really helps due to the large volume of enemies here, so having someone manage emplacements (recommended Standard) and sniping out the tuners will be immensely valuable.

Note: A is bridge; B is sniper, EC is sniper; c and D are land

Wave 1: A Resistors followed by Tommys, then A Resistors, then Tommys then Burst Transmitters then more Tommys and Resistors

Wave 3: B Snipers then A Resistors

Wave 5: B and E Aerials and C D blitzers followed by C and D blitzers

Wave 8: E Snipers, A Big Willie, followed by B Snipers

Wave 9: A Tommys with D and C Blitzers