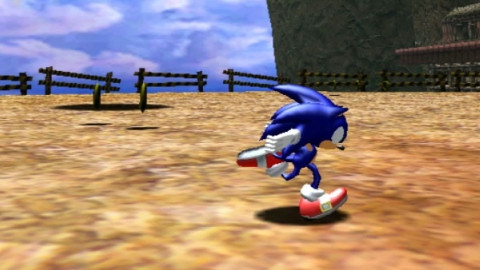 Sonic Adventure made me realize how far 3D platformers have come in the last decade, and what kinds of things gamers are willing (or aren’t willing) to accept as conventions of the genre. For example, in a modern 3D platformer, it is expected that the camera will be easily controllable, and at least always focused in the direction the player is headed. It also expected that the controls will be smooth and precise as to avoid cheap frustrations, and that you will be given some sense of direction of where you need to go in the open world. Sonic Adventure provides none of these standards, and it is incredibly frustrating. Sure, these modern sensibilities of a 3D platformer weren’t assumed or even expected in the late ’90s. But this is 2010, and Sonic Adventure just doesn’t hold up.

Moves fast and smooth – Sonic Adventure is at its best when you’re moving at lightning speeds through the levels and quickly reacting to obstacles and enemies. Everything looks very smooth in motion, which is commendable for the speed at which you move at. And as long as the camera and controls are cooperating, Sonic Adventure shows moments of awesomeness, and a glimmer of hope of what a good 3D Sonic game could be like.

It’s the first Dreamcast game on XBLA – It’s exciting to see the first official Sega Dreamcast port make it over to the XBLA’s game library. Sega has already announced more Dreamcast ports including Crazy Taxi, and has mentioned they are open to the idea of porting Sega Saturn games as well. This could be an exciting trend for nostalgic gamers and for Sega fans, and it’s all starting right now with Sonic Adventure. There is already a precedent for PlayStation, Nintendo 64, Genesis and Super Nintendo games coming to XBLA, so why not Dreamcast and Saturn games, too? 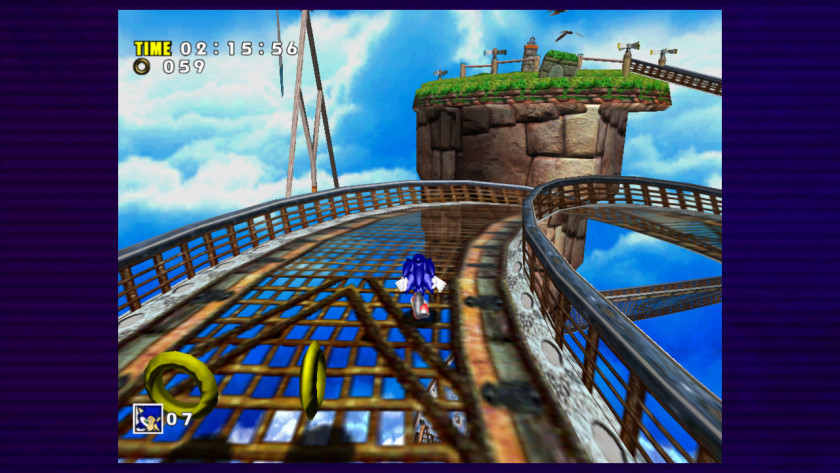 Terrible controls, camera and voice acting – The schizophrenic camera and lack of responsive controls make Sonic Adventure borderline broken and unplayable. Like I said above, the game is at its best when you’re moving quickly through levels on a track, which also happens to be when the player must input the least amount of control. Sonic and co. will come to a complete stop should you even brush up against a wall, and that’s if the camera is even pointing in the direction you are headed, which it isn’t a majority of the time. To make things worse, you can’t even rotate the camera or point it in the direction you want to. Coupled with some of the worst voice overs I’ve had the privilege of ever hearing, and Sonic Adventure is a downright mess.

No widescreen support – It’s not that big of a deal, but I don’t see why Sonic Adventure couldn’t have been made to support widescreen TV’s. When other games like Perfect Dark are given every HD upgrade possible, Sonic Adventure is content to only support surround sound. The ugly navy blue sidebars don’t compliment the game very well, either, and make the port seem lazy when compared to others.

Annoying Adventure Worlds with little direction – Sonic Adventure seems confused about whether it wants to be a 3D open world adventure, or a 3D version of the Genesis games or a combination of both. Whatever the case, the game’s “Adventure Worlds,” or hub worlds that connect to the various levels you would normally race through, are boring and irritating to navigate. Players given very little direction of where they need to head to next, which usually requires them listening carefully to the grating dialogue in the cut scenes for clues, and even then it’s not always quite clear. The Adventure Worlds break up the pacing of the game with detrimental instances of wondering around clueless of where to go next, which is the last thing I want to do in a Sonic game. I can’t imagine how much better Sonic Adventure would be without these Adventure Worlds.

It almost breaks my heart to speak so lowly of Sonic Adventure because I was so ready to love it. Sonic the Hedgehog is almost synonymous with my childhood, and I was eager for Sonic Adventure to bring me back to those days. But the cold reality is that Sonic Adventure was probably never a real good game to begin with and that it got a free pass during the Dreamcast’s infancy.

If Sonic Team’s objective was to port the game exactly as-is to XBLA, then they fully succeeded and I applaud their hard work. Problem is, all the game’s original flaws are intact and are only magnified in today’s game market.

As a new release on XBLA (and PSN), Sonic Adventure just doesn’t compare to similarly priced games in the same genre. Games like ‘Splosion Man, Braid and The Maw are perfect examples of a better way to spend 800 Microsoft Points, as are the original Sonic the Hedgehog games on XBLA. Sorry Sonic fans, but it’s time to take this hedgehog out behind the shed and shoot it.