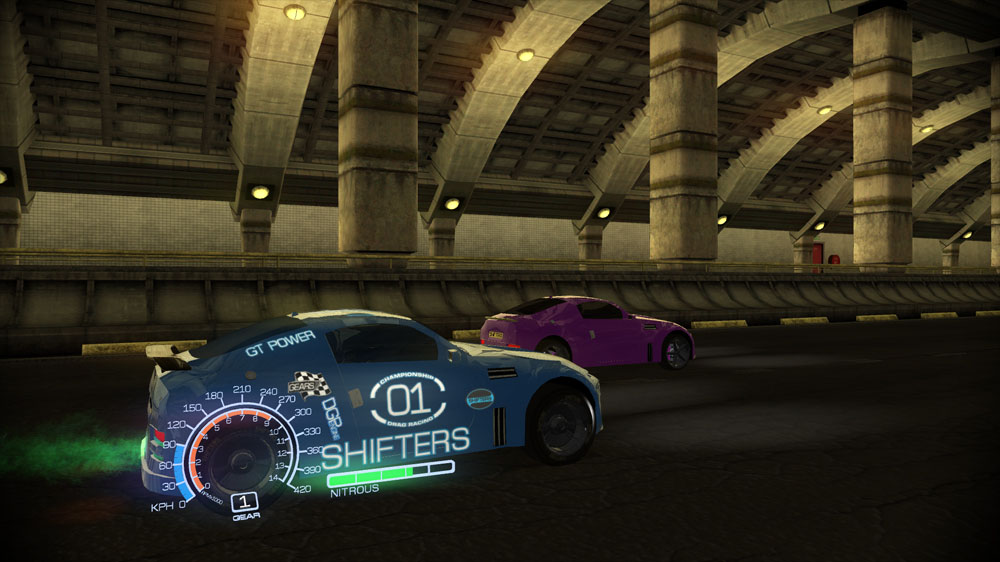 Shifters was developed by Third Eye and released on April 3, 2011 and costs 240 Microsoft Points. A copy was provided by the developer for review purposes. 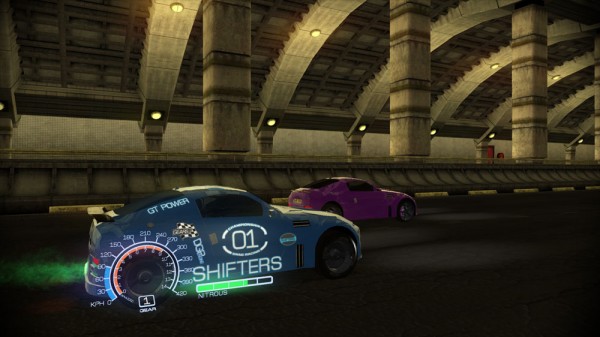 Ever notice the cool kids who plant their “suped up” foreign cars in the parking lot of your local 7-11?  You know the ones — they add mild alterations to wheels their parents bought in hopes to one day be the modern Salvador Dali of cars, except that they come from modest working-class families with little disposable income?  Yes, those kids.  Anyway, their hopes of creating the perfect automobile with flashy lights and aerodynamic spoilers on a budget has finally come true in Shift.

Retail-level graphics – Like the roads the player drives on, Shift’s graphics are slick.  The vehicle models are exceptional for an XBLIG title, and when players zoom in on specific sections of their personalized vehicle, they’ll witness how much detail went into making the models.  It’s not on a Forza 3 level, but it’s impressive for a title of this nature.  In addition, the unique camera angles and dynamic menu interface make the game just as polished as the vehicles players will personalize to their liking.

Customization – The core gameplay element of Shifters is betting on races the player’s vehicle performs in.  The player has minimal input over the race, which are displayed from a side viewing angle.  Players control the throttle, clutch and nitro and utilize these tools to defeat a single opponent.  But winning a race is all about the vehicle.  Before betting on races, players have the ability to tune their vehicle’s spoiler, exhaust, engine, body, rims and gearbox creating the ultimate machismo automobile.  Colors are adjustable too.  When players feel elevated and proud of their customization skills, they can brag about their achievements to their friends on Xbox Live.

Depth – At the beginning of the game, little options are available.  There’s a basic setup for a car and little cash to bet with.  Once the game progresses, more options are opened up, and that’s when the game starts shining like headlights on a dark highway.  An endless array of races are available to the player, and the more cash they win on bets, the more options they have for customization.  All of the progress is tracked by an “Honor” system that rewards the player with sleek trophies. 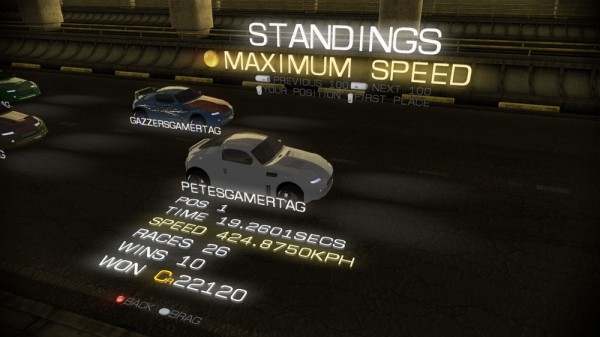 Little accessibility – For players who don’t care about the color and angle of their car’s spoiler, little motivation exists for buying this title.  The cars aren’t actually controlled in a conventional way; there’s no steering, just a focus on accelerating and shifting.  No tutorial is laid out for the player either — the controls are displayed during load screens and if the player can’t drive stick in real life they’re gonna have issues here.  For those who love tuning cars, this title may be for you, but otherwise it’s not for the arcade racer fan.

Few cars – Sure, this is an XBLIG title and vehicle licenses are out of the question, but a little variation would spice up the game a bit.  Players can customize their cars, yes, but outside of having three or four options per customizable section, the tuning is limited.  Players can’t purchase additional cars and “supe” them up; they’re limited to one at a time.

Confusing multiplayer – The game claims to have online multiplayer, but there isn’t an option to choose single player over multiplayer, players just choose “Ready to Race” and the game searches for online opponents, if none are available they are forced to race an A.I. controlled opponent.  We weren’t able to find any online opponents during our play through, so players who want to have a multiplayer experience will have to find friends to game online with them.  But even then, there is no option to race against a friend, the opponents are selected at random. 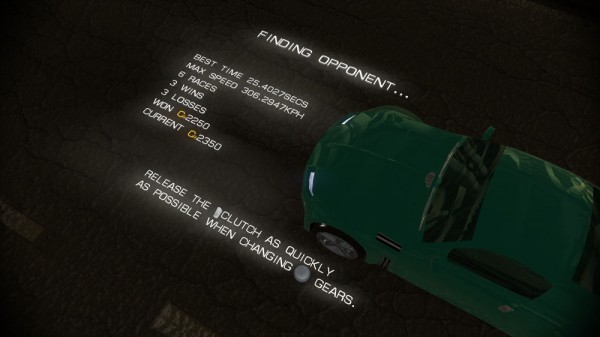 On the surface, Shifters is a great title.  It looks great, has a smooth interface and robust customizable options.  But once players dive deeper into it, they’ll find the experience limited.  If the game included a tutorial, a distinction between single player and multiplayer as well as more purchasable vehicles, nothing would come between the kids in the 7-11 parking lot and this title.  As it is, we simply cannot recommend the purchase of Shifters to everyone. It’ll appeal to some folks however, so be sure to give it a try.