Shank was developed by Klei Entertainment and published by Electronic Arts. It was released for XBLA on August 25, 2010. Retails for 1200 Microsoft Points. 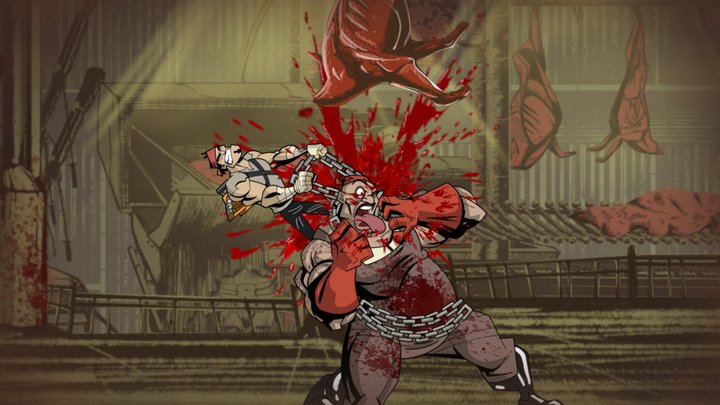 Shank is not for the faint of heart. If you don’t like over-the-top violence or challenging skill-based combat, you’re probably too much of a wuss for Shank. In all seriousness, Shank is a gruesome, cinematic side-scrolling revenge story that’s modeled on old school beat-em-ups like Double Dragon, Streets of Rage, and Final Fight. The violence is like a Robert Rodriguez movie, including cutscenes and combo animations full of blood and guts. The difficulty level isn’t exactly Ninja Gaiden, but the Hard mode will seriously challenge even experienced gamers.

Cinema-Quality Art Direction – From beginning to end, Shank puts forth a solid argument for games as art. We’re not just talking about the Pulp Fiction-esque cut scenes, the riveting soundtrack, and the great writing; combat animations are just as much a part of the overall storytelling experience. As the game progresses, you get access to more moves and more weapons… which means more opportunities to feel like an utter badass. But what really sets Shank apart is the gorgeous artwork and memorable direction. Over the course of your playthrough, you get the feeling that Shank isn’t just something you play; it’s something you experience. 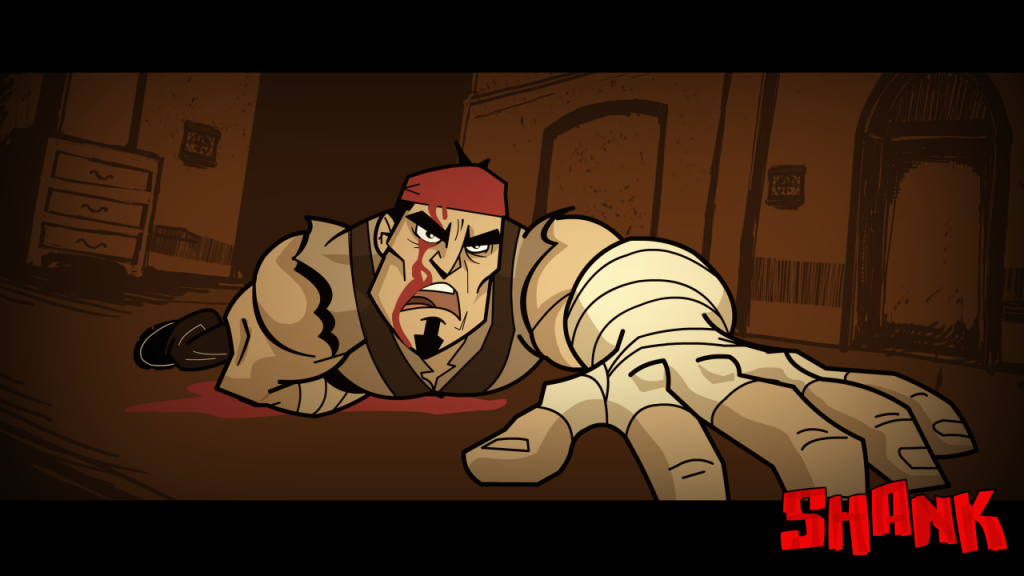 Skill-Based Combat – Do you ever feel like games are just too easy these days? Whatever happened to wasting quarters in the arcade, turn after turn after turn? Shank will bring you straight back to your days at the cabinets, with bonafide skill-based combat that won’t let you get away with simple button mashing. And that’s on Normal mode. Switch over to Hard mode and you can say goodbye to checkpoints and goodbye to getting through each level on your first try. In most games today, experienced gamers can just ratchet it up to hard on the very first playthrough and expect to succeed. Our advice: don’t be a tough guy. Start with Normal.

Double Dragon Co-Op Brawling – If there’s one thing we love more than a good street brawler with awesome combat and a killer storyline, it’s doing it all with a friend. You can’t play the main story in co-op (nor would it make much sense), but Shank comes with an excellent prequel storyline for a good old fashioned tag team. Klei didn’t just phone this in either: the co-op includes a variety of moves that can only be pulled off with two players. Cool Unlockables – Shank gives players a lot to strive for: better times, concept art, Achievements, and ten unlockable costumes. Some of these are pretty hard to obtain, but none are impossible. That makes you even more determined to collect everything. Check out our complete guide to Shank’s unlockable costumes.

It’s Too Short – If you combine the single player campaign and the co-op campaign, Shank is the perfect length for an XBLA title. But the co-op is local only, so you’ll have to have have real life friends to play through the back story. And if you don’t, the game will definitely feel short. With or without a friend, there just isn’t enough of a good thing.

Unforgiving Platforming – So, this is a minor complaint. After all, how many times did you play an arcade game and miss one little move, only having to start all over again with a fresh quarter? But there are several times in Shank when you have to leap off a platforming element early or else die. Only, there are no visual cues beforehand: you just have to die and use that as a lesson for next time. If you always whine, curse, and blame the game for your own failure, you should just stick to Normal mode, where you can start at a checkpoint every time you mess up the platforming.

The X Button – More of an annoyance than anything else, the button to pick up items is the same as the primary attack button: in both cases, the X button. Unfortunately, that means that in the heat of combat, it’s pretty easy to accidentally pick up health—even when you’re at full health already. This is all part of the anti-button-mashing Shank experience. You have to be aware of your environment and hit the right button at the right time, or you end up wasting health, pouncing on big baddies that are pounce-proof, or thrusting yourself off a cliff. But come on, why would I pick up health if my health meter is full?

So there’s the good, the bad, and the ugly from Shank. This is a must-play for anyone that cares about the artistry of XBLA games. Or for anyone yearning for some old school arcade-style brawling. Just stay away from Shank if you have a weak stomach.