Score Rush is a mix between a schmup and a dual-stick shooter.  It’s the latest installment from seasoned XBLIG developer, Xona Games.  It sells for 80MS points ($1) on the XBLIG section of the marketplace.

Xona Games has a knack for making great, intense, fast-paced games.  As the makers of one of Japan’s top XBLIG games, Decimation X, you know they mean business.  They’re quickly becoming one of the best XBLIG developers and Score Rush is no exception to the list of great Indie games available today.

Score Rush is your basic everyday schmup with very solid dual-stick controls.  If you aren’t a fan of either genre, then you probably won’t enjoy this game.  If you are a fan of either genre, then you will probably love this game.  It really is that simple.  Schmup fans know that great gameplay, controls, patterns and bosses make the difference between an average game and a great game.  After about 5 minutes with the demo, it was clear that Score Rush did all those things right.  For only $1, this is easily one of the best values on the marketplace. 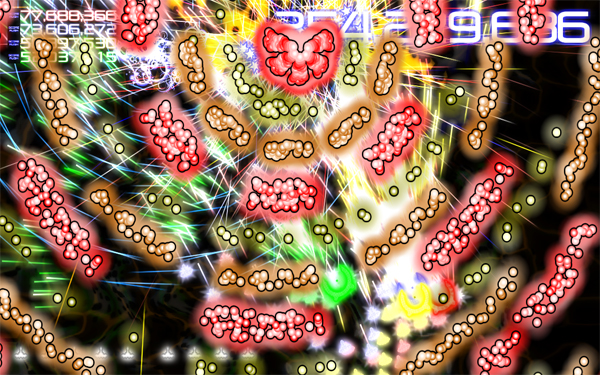 So here’s what I liked:

Sights & Sounds – Score Rush is an absolutely beautiful game.  The work that went into the graphics is amazing and the sound provided by Dragon Music is just as good.  It showcases the engine that was developed for Duality ZF and it’s quite a showing.  The only minor complaint would be that there is little detail in the player ship and the enemies.  But I have a feeling that this game is a “this is what we can do” proof of concept.  Whenever Duality ZF releases, you can bet there will be great detail in all objects.  Serving as just a taste of what is still to come, the graphics in Score Rush still go far beyond expectations.

Screen shake – Usually any game that causes the screen to shake kills my interest.  No matter how many times you play a game, a screen shake seems to always take you out of the zone of immersion.  This game finally does the screen shake correctly.  Anytime you kill a boss or mini boss, the screen shakes.  But the genius mechanic is that when the screen is shaking, you are invincible.  It serves as a reward allowing you to re-align your ship instead of the common frustration that usually results from screen shaking.  I would like to see this feature as a standard practice in all games moving forward.

Difficulty – Schmups are notoriously hard.  Score Rush is hard, but not too hard.  If you find yourself beating the game with ease, no worries.  Each time you beat the game, you unlock a harder difficulty setting.  Most schmups demoralize you by making you chose an “easy” difficulty and Score Rush skips that step.  Now when you beat the game, you feel proud of your accomplishments and challenged by the new difficulty.  Let’s face it, when you beat a Raiden game on easy, you really don’t feel any pride at the end.  Score Rush walks that fine line of difficulty very well. 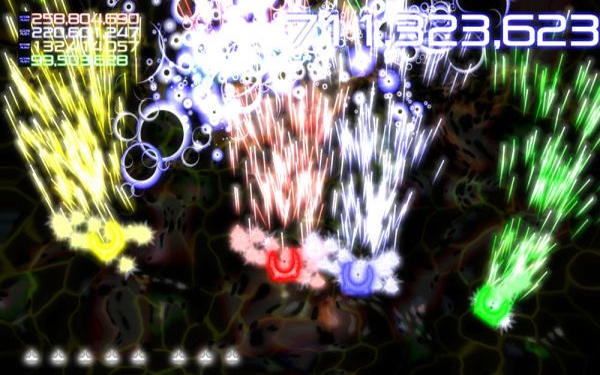 No Leaderboards – It’s my only complaint and a small one at that.  There are a great deal of issues that are presented to indie game developers when trying to add online leaderboards, but some XBLIG games do feature them.  It would have added an extra level of addiction to the game as most schmup players do try to climb leaderboards.

This really is a great game.  If you’re an avid schmup player, then you’re probably already playing this game.  If you aren’t a schmup fan, give the demo a shot.  It will be very clear in the demo if this game is something you can enjoy.  Sure it’s only 1 dollar, but I still recommend you try it before you buy it.  It scratches a very specific itch but you might not have that itch.