A good multiplayer XBLA title facilitates fun with friends on the couch and Worms 2: Armageddon has couch-side fun for four friends even with only one controller. Worms 2, as with every other iteration of Worms, is a turn-based artillery shooter of the two dimensional sort sporting a lengthy campaign with 35 missions, tons of custom game customization options and a random map generator to ensure every non-campaign game will be a uniquely explosive experience. Worms 2: Armageddon employs the tried and true artillery game formula flawlessly (as it has been for years) and provides plenty of content to mix up the gameplay, and keep Worms 2 showing up as an answer to “What should we play?” time and time again.

Worms 2: Armageddon is a game of strategy and precision as much as it is a game of random luck and good ol’ fashion explosions. Players are given a sizable arsenal in any given game of Worms, easily modifiable to fit desired game settings and weapon constraints, but for the most part the selection boils down to fired/launched projectiles (bazooka, shotgun etc.), thrown projectiles (various grenades and bombs), utilities (grappling hooks, jetpacks etc.), and super weapons (air strikes, super explosive sheep). The main mechanics involve setting a trajectory angle and power to hit your desired opposing worms, dealing damage and destroying terrain as you do so. Crates drop from the sky to provide random support,  landmines scatter the land, and initial worm placement randomizes to give each game a unique feeling. 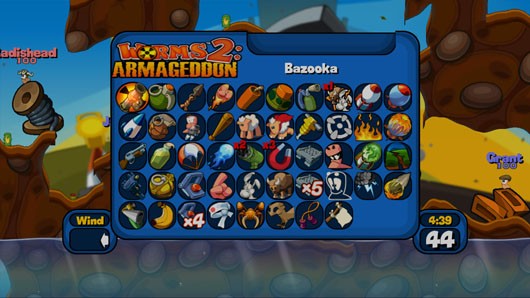 Easy to learn, tough to master – Pick your weapon, aim and shoot, deal damage. The core system of the game is easy to grasp, even the wind mechanic fits in nicely when it comes to making calculations. Figuring out what each weapon or tool does and how to use them effectively, however, takes time. Evaluating risks when in limited supply of a certain weapon, spending a turn picking up supplies rather than taking out worms, or playing defensively versus offensively is a big part of playing Worms at a strategic level and rewards attention and foresight. Ultimately, seasoned players will be able to create gametypes that focus on fun versus strategy or vice versa, and be all the better for it, but the starting options are ample and lead to comprehension in short time.

Customization extravaganza – Players are given tons of bits and pieces to change about gametypes as well as their own worm teams. Plenty of hat options are provided for the worms as well as a large amount of voice sets and tombstones. The star of the show, however, is the gametype creator and editor. Amongst many, many options are the ability to modify length of the game as well as the rounds, change default terrain types and options (i.e. one big open field, two small islands, etc.), allow and disallow any weapons as well as change ammo availability, and much much more. Games can get really specific and confined or absurdly broad and ridiculous, it’s all up to the players!

Grab bag of fun – Few games incorporate random elements outside of the party genre, but Worms 2 doesn’t shy away from a little silliness here and there. Crates fall from the sky giving players jetpacks or gigantic concrete donkeys which plow through the map, players can spawn a clear across the side of the map from each other or within punching distance, and landmines and oil drums can make for some high damage opportunities. Taking advantage of randomness makes for some ridiculous situations, and the best part is if a group of players hate randomness, the option to turn off random elements is readily available.

Doesn’t count unless you called it – Worms 2 provides an abundance of “DID YOU SEE THAT!?” events, every match will have at least one. Banking a grenade off a wall, down a slope and onto an opponent’s very cranium is priceless enough, but to add joke to injury as the targeted worm freaks out all the while the grenade’s fuse is going down. Every once in a while oil drums, landmines and cluster bombs will combine in one thundering crescendo, blowing the map to smithereens, sending worms flying through the carnage wide-eyed and screaming for their lives. While every once and a while someone nails the perfect ‘nade toss or shotgun blast, but for the most part crazy things go down in Worms and half the fun is watching the booms boom. 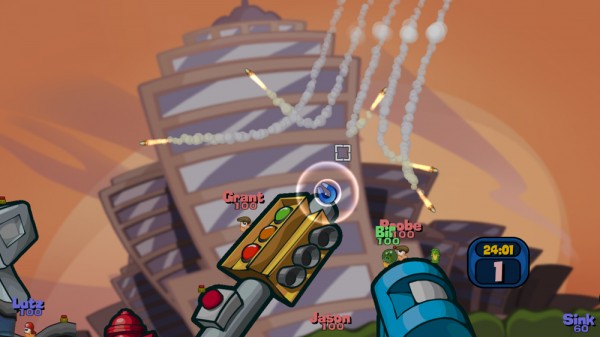 Really? REALLY? -Dating all the way back to… well probably pong, though Mario Kart jumps to mind immediately, players have called the A.I. components in multiplayer games cheaters. Every once in a while, a computer will land a jetpack, a holy hand grenade, a full health pickup and be nested safely on a precipice all to themselves and players will wonder just how ‘random’ the situation really is. When it’s not the A.I., it’s players, though of course instead of cheating the game is simply favoring them for some undefined reason. While some tempers may remain in check, a game with random elements could easily spin out of control and leave some players feeling sour.

Still playing huh? – Eliminated players in matches with more than two players have nothing to do after the match is over. They get to sit and watch, or go make a sandwich, but they don’t get to play or affect the game in any fashion. Some sort of post mortem bombing, a random teleport here and there, something to give them a reason to keep watching would be nice. While not the most critical of issues, it’s unfortunate that such a prominent party-friendly game can end up alienating a player here and there if the Worms gods are unfavorable. What’s worse is a game of Worms can go for quite some time if the options allow it; the earlier a player is eliminated, the longer they have to wait to jump back into the fun.

Worms 2: Armageddon presents a simple and accessible strategy game formula wrapped in spontaneity and explosions. Being able to play with three other buddies on the same couch with only one controller is definitely a plus, though that can slow down the game. In fact, sometimes it can go on a bit long, and it’s unfortunate when the random number generator is unkind, but if nothing else the Worms arsenal allows for adaptation to sticky situations. Tons of variety from match to match as well as the ability to control and create the gametypes tailored to each individual’s style of fun makes Worms 2 a must-have for anyone that loves to have gaming parties.