In May 1998 Luxoflux and Activision teamed up to create a major competitor to the Twisted Metal games;  Vigilante 8.  Set in an alternate 1970’s during an oil crisis, the game pitted the criminal Coyotes against the Vigilantes, a team of civilians who take the law into their own hands.  The game was a commercial success and sprouted a sequel, Vigilante 8: Second Offense.  The series sat dormant for eight years until Isopod Labs, a group of developers consisting of three members of the Vigilante 8 team, brought the series back to the forefront with Vigilante 8 Arcade.  But could this revival to the series live up to the fond memories players have of the original games?  Found out in today’s Rewind Review. 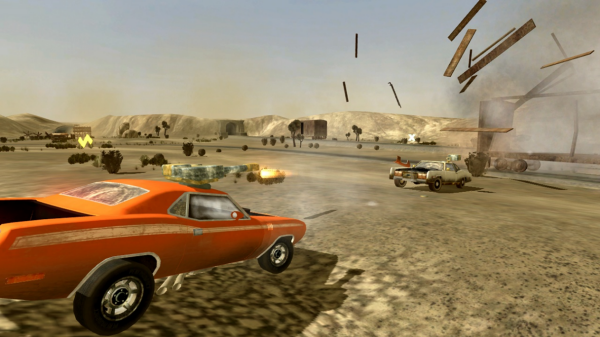 Imaginative arenas – V8 Arcade brings back the classic Vigilante 8 fun with a re-imagining of environments and vehicles from both Vigilante 8 and Vigilante 8: Second Offense.  While all of the environments are inspired by the original games, each is redesigned with greater detail, larger scale, and a new sense of imagination.  Each level feels new, yet familiar.

Impressive multiplayer – There’s nothing better than being able to jump into a game with a few friends and cause carnage.  Isopod Labs made a smart move in giving players the ability to combine four player splitscreen with online play.   Multiplayer games maintain a strong framerate and lag is minimal.

Bang for your buck – Perhaps one of the biggest selling points for the game is the low cost; both in Microsoft Points and in hard drive space used.  At only 800MSP and 117MB the game packs in a lot without a major hit to your wallet or your storage. 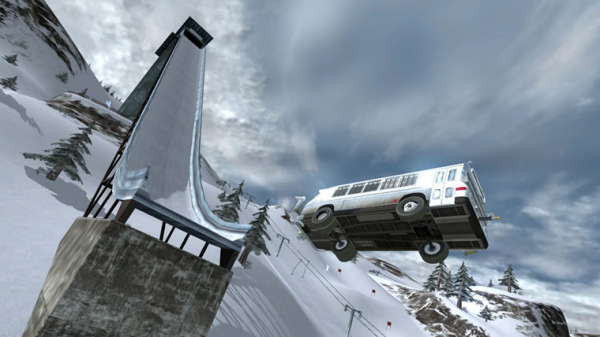 Inconsistent controls – Some vehicles are an absolute dream to drive.  Others, such as the bus, are not a dream, but they really aren’t meant to be.  But control issues come into play when players are in the thick of combat and need a quick turn around or escape.  Yes, experienced players know how to command their vehicles, but new players may be turned off by the learning curve, or even the style of physics used for the vehicles.

Messin’ with canon – Vigilante 8 Arcade is suppose to be a remake of the classic series, but it can’t decide where it sits in the series.  Some characters drive the current-gen equivalent of their original V8 cars, other characters their Second Offense vehicles, and even others a totally new or completely redesigned vehicle.  Die hard fans of the game might find this frustrating as their driver may not be behind the wheel of that classic car they loved so much.

Misdirected focus on extras – The developers added support for the Xbox Live Vision camera during multiplayer matches as well as unlockable models from the original game.  These are nice, but the time spent focusing on these could have been spent further honing the gameplay so that it appeals to more players.

In the end, V8 Arcade is a bit of a mixed bag.  It oozes with the genuine love the developers put into the game, but lacks the appeal to all audiences.  Perhaps a larger rotation of testers would have brought fresh sets of eyes in to tighten up the gameplay.  Either way, this is one game where players need to spend more than a few minutes in the trial version before deciding whether to purchase it.