Trials HD was developed by RedLynx and published by Microsoft Game Studios for XBLA on August 12, 2009 as part of the second annual Summer of Arcade. Retails for 1200 Microsoft Points. 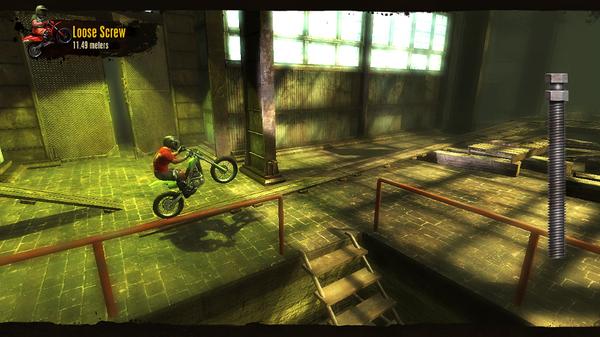 Trials HD is the quintessential example of a game that is instantly playable and fun, but tough as nails to master. What starts off easy and fun gradually becomes borderline maddening and impossible, rewarding the most patient and determined players with personal satisfaction as well as leaderboard bragging rights.

The object of the game is simple enough – players control a guy on motorcycle through various obstacle courses, and use the game’s realistic physics to correctly distribute their rider’s speed, momentum and weight distribution to reach the finish line. The idea is to finish each course as quickly as possible, with as few crashes (or faults) as possible. Checkpoints are placed throughout each course, which gives the player a place to start at should they mess up or fault.

While some courses are easily finished faultlessly in under a minute, it’s not uncommon for some of the more difficult courses to take about 30 minutes with literally hundreds of faults before completion. It’s here that Trials HD separates the truly determined and patient players from everyone else, as they will likely give up on a seemingly impossible course. But those who stick with it will be rewarded with one of most satisfying, fulfilling and addictive games on XBLA.

Outstanding level design – Trials HD features some fantastic and creative level design. The courses are smartly constructed to be challenging with the right amount of fun, and do a good job at teaching the player essential skills to use later when things become more difficult. And with over 50 courses (not including the expansions), each course manages to remain unique and distinctive from the rest, making for a fun and memorable experience on each one.

Creative skill games – Besides the main part of the game, Trials HD features a great amount of minigames called Skill Games. These range from a hill climb, to flinging the ragdoll motorcycle rider and breaking his bones, to pulling a sensitive cart of explosives or riding inside of a metal ball. There are many others, but all are a fun distraction from the regular game.

Great level editor – Trials HD features a very robust and easy to use level editor, which is pretty impressive for an XBLA title. Players can create and upload their levels for friends to play, and many are extremely remarkable in their creativity. Some were so good that they caught the eye of the developer, RedLynx, and were handpicked to be in the games latest expansion, the Big Thrills pack. Also, check out our weekly feature Trials HD Tuesday for an in depth look at other notable user created levels. Steep difficulty curve – As mentioned earlier, some of the later courses in the game spike in difficulty quite a bit, often requiring hundreds of tries to finish. The steep difficulty curve may turn off a lot of players, and frustrate them to the point of not being able to progress in the game any farther. Some people enjoy this type of challenge, and it all depends on the individual’s level of patience and how they handle frustration. But no matter the player, once the Extreme tracks are unlocked, the true meaning of the words “obstacle” and “patience,” will be explored in every way possible.

Limited use of user created levels – it’s a real shame that user created levels can only be shared among people that are friends on Xbox Live. And without a voting or rating process, the only way for user content to spread amongst their friends is by word of mouth. It’s hard not to imagine what a community section of user created levels that were open to everyone would be like (like Halo: Reach). Such a feature would provide endless gameplay, and something that fans could continuously come back to and find new content to play through. What’s here is better than nothing, but it’s hard not to think of it as a missed opportunity. Despite it’s difficulty, Trials HD remains one of the most fun and addictive games on XBLA. Players will be saying “just one more try” to themselves without realizing hours have passed by, and if you’re looking for a real challenge, then look no further than this game.

There’s a ton of content not including the two expansions, and players can spend months creating levels, shaving time off on their scores, and beating their friends on the leaderboards. Even with the steep difficulty curve in the later courses, Trials HD is fun, plain and simple, and is one of those games that every XBLA fan should own.