Scrap Metal was developed by Slick Entertainment and published by Microsoft on March 10, 2010 as part of the Xbox Live Arcade Block Party for 1200 MSP.

This junkyard demolition racer plays out in a very straightforward way: beat missions, unlock more cars and locations to race at. The majority of the locations have eight events to complete and have a few unlocks. Cars you wreck are stored in your junkyard where you can restore them and use them in events. Various upgrades can be made to improve the cars performance by using rewards from events. Each car has a specific weapon, some more unique than others. In the multiplayer the same cars available in the single player are used, however each location has a specific selection of vehicles chosen specifically for that map and gametype. During most events powerups can be picked up to get more nitrous or health bonuses, both of which are very important as most of the time if you get scrapped, you’re out for good. 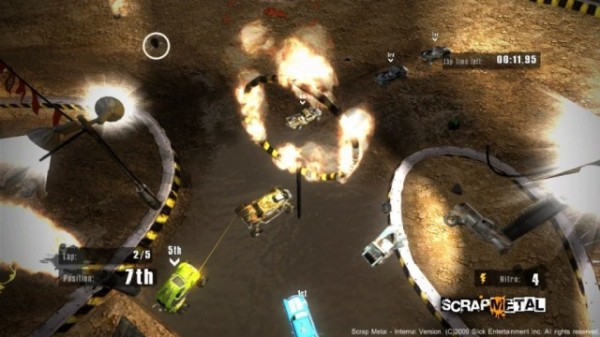 Car combat, pure and simple – Scrap Metal is one part racing, one part car combat, and fuses the two just fine. The maps properly facilitate both combat and racing, the controls are straightforward, the action is nonstop and the goals are obvious. It gets the job done, transforming something boring into a solid, fun game. In addition it has a decent amount of content to race around in. Blowing up another person’s car, friend or AI, is rewarding and there’s plenty of room to master corners, jumps and evading adversaries.

Vehicles aplenty – There’s a wide variety of vehicles and handling styles in Scrap Metal. Most of the games are considered “cars”, but some are trucks and there’s even a hoverboat thrown in for good measure. The variety of vehicles seems inspired by some of those available in Super Nintendo classic Rock N’ Roll Racing and it does the game well. Some of the weapons are pretty similar or are in fact repeats, but the differences in handling and appearance are prominent and worth exploring. Being able to change vehicle colors is nice too.

Destruction medley – There are plenty of game modes to jump into in the multiplayer portion of the game to keep racers interested after completing the single player portion. Basic game modes are simple like King of the Hill, Demolition Derby — but a few of the maps have their own unique gametypes. The Wetlands, for instance, has a tank war mode and the Motor Dome has the Oval Rally Cup for those technical turn-takers. On top of all this the game provides lots of options including toggling between random track, random type, random both or full manual. It might be a small touch, but those sorts of additions really help keep transitions from one multiplayer smooth. 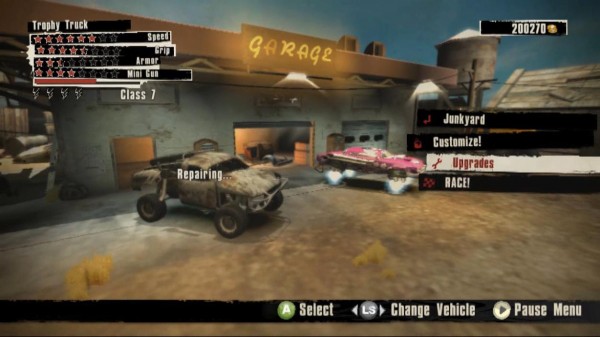 Well this sure is… a game – Scrap Metal works; it’s solid, it’s fun, it’s actiony, but it’s not trying anything new. The maps are typical top-down racer maps, the cars, while interesting, don’t have nifty features other than some specific weapons, and the progression system is very uninspired. For the most part each map will consist of turns, jumps and stuff in your way; no interactivity, hardly any shortcuts or moving parts. If you liked a car you had in the first few missions of the game, too bad because it won’t be viable after unlocking newer, better cars. It’s not all bad, the game does in fact work well, but it should’ve pushed the envelope a bit more.

Motor envy – In the multiplayer the lack of balance between cars really glares through the games paintjob. The vehicles are divided into classes, each of which for the most part is clearly better than the one preceding it. However, in any one game mode there may be a range from class 5 to 8, and it begs the question why play the lower level car with worse stats in every way? Because it looks nice? Well have fun looking awesome in last place. Player skill just can’t make up for the statistical differences. The multiplayer at least (since there are no upgrades) might have been better off using a point allocation system so that all the cars available have the same chance at winning based on how each vehicle’s performance points were distributed. On top of that since the weapons aren’t pickups and instead are attached to specific cars, in some cases one car may be super good because of the weapon, and in others you may have to pass on your favorite weapon because it can’t perform. It’s really disappointing to have to make those sorts of choices. 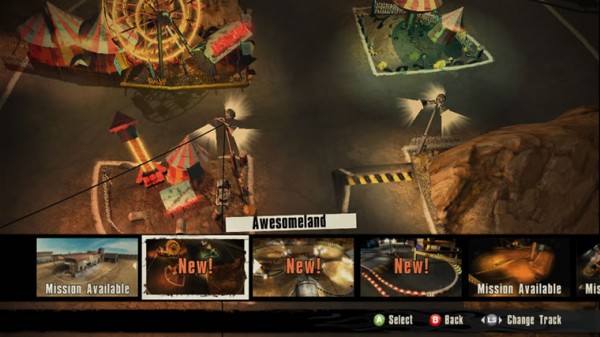 Scrap Metal‘s not junk, but it’s nothing to put in a museum either. Car combat enthusiasts will be disappointed that each car only has one weapon and can’t use the others (a la Twisted Metal), and race enthusiasts will be disappointed that each tier of car is so exclusive that using under-leveled cars just doesn’t make sense, however those in the middle will love this game. In fact, either group of gamer can find something to enjoy in Scrap Metal, but whether or not they’ll have enough fun to overcome the shortcomings and lack of personality isn’t set entirely set in metal.