Its a video game – Board gamers will tell you that there is nothing like playing a game with the actual physical components. That’s certainly true, but the benefits of playing it on XBLA are numerous. There is no set up or clean up time, there’s no need to keep track of all of your holdings, the computer does it all for you. Best of all: no more dice rolling off the kitchen table and under the fridge. Playing Catan on XBLA really speeds up the process, which is a great thing.

Easy to use interface – It would be an easy thing to mess up the interface for a board game and make it virtually unplayable. Thankfully it’s very clear that a lot of thought went into making Catan easy to play and understand. We were able to bring people who had never even played the board game before and have them play a game with us in a few minutes. It really is that simple. The game also comes with a tutorial for teaching the finer points.

Nice look – The visuals are not going to win any awards for excellence, but they bring across the feel of the game very well. The game is largely non-confrontational and everything from the graphics to the music has a peaceful vibe to it. It really is a great game to play while relaxing.

Its Catan – Those who have played Settlers of Catan know that it’s an excellent game. The XBLA version takes that and makes it even better. For those who haven’t played; you’re in for a treat. This game is a perfect blend of chance and skill. Played with friends it’s always fun.

Trading done right – Trading is perhaps the most important aspect in Catan. It’s easy to understand who wants what with the trading system in this game. You don’t really even need a microphone, but talking is half the fun. It is always amusing to try to talk one person out of trading with another strictly to stop them from progressing. All of the trade embargoes and shifting alliances really make for a lot of fun. 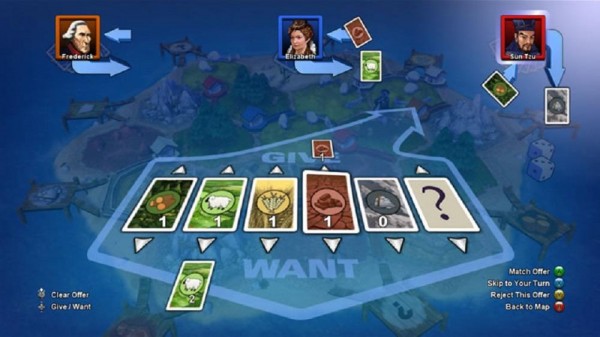 King making – Anyone who has played Catan very much also knows that sometimes certain players will be at distinct advantages right from the first turn. This has to do with the random layout of the board and the first choices each player makes. Skill can somewhat negate this, but it does happen. It is not much fun to be halfway through a game and know that you have no chance of winning. Even so, these players can still play a role in the outcome of the game which is why they keep playing.

Sparse online community – As with many older XBLA games, the online has mostly died off. We had difficulty securing games with strangers. When we did manage to, they were against professional Catan beasts. Regardless, it is more fun to play with your own friends, be it online or in person. It’s also worth noting that in all of our online games we never had any connection problems or lag.

Underwhelming AI – It just isn’t much fun to play against the AI. It really isn’t the fault of the developers, rather it’s just so much more fun to play with people. We appreciate that they added that option to go it alone against the computer, but it shouldn’t be your first choice by any means. Catan is a fantastic game that is very well interpreted on XBLA. Any board game fan will want to get this immediately. But Catan has a lot to offer to the uninitiated as well. It is a fantastic introduction to the broader world of German board games (which are all the rage these days). Ultimately Catan is a strategic gem that is a hoot to play with your friends.