Solid gunplay – The guns work like guns, they feel like guns, and the differences between each gun is tangible and balanced. Entering a firefight with a shotgun or SMG means get close, snipers are best off staying back, and the LMG and assault rifles play the midfield. While nothing is spectacular about the gunplay, a solid combat engine means the game is playable and enjoyable at a base level of simply point a gun at someone and shooting them.

Robust customization – The customization mechanics for Blacklight: Tango Down really steal what parts of the show you’ll stick around for, bypassing the large weapon selection of other shooters in favor of a basic core selection with many adjustable parts. While at first the modifications available is minimal, as players advance through the ranks the selection allows for far more fine-tuning of gameplay. Blacklight does a good job of capturing the relevant aspects of weapon statistics and giving players the ability to control them. The Black Ops – The cooperative “Black Ops” modes are awful. The AI presents a strong tacked-on feeling exhibiting no personality or combat tactics. There’s little if any story elements to the modes and the point-to-point progression of each level is bland. Supply points scattered throughout the levels quickly allow you to heal up to a certain amount of health, encouraging players to get most of the battles to take place right next to a supply point since AI will rarely give chase if the player simply steps off to the side to heal. Along with that having another player simply amounts to more bullets firing at the enemies, there are no nifty challenges or puzzles etc. that spice up cooperative excursions in other games.

The Hyper Reality Visor – The Hyper Reality Visor, or HRV, seems like a wonderfully unique implementation with plenty of gameplay uses. Well it is, so much so that a comfy protected spot allows a player to camp to all new levels! The backside is that other players know where they are as well, and so they could go get them and HAH! Oh but then the camper sees them coming, so perhaps it would be better if everyone just stayed home and didn’t go outside at all. Not allowing players to fire while in that visor mode is a good balancing mechanic, but it fails to slate the sheer usefulness of the visor overall and the amount of game-stopping power it possesses. Blacklight: Tango Down doesn’t get to take advantage of its speed and pace because the tactical facet of the game centers around not firing and waiting for the enemy to move.

Immersion just a step away – Blacklight‘s user interface is brimming with an interesting style, so are the environments of each map, even the character models are kinda’ cool, but it’s all for naught because there’s nothing to make you care about them or explain why things are the way they are. The Black Ops modes don’t tell much of a story and of course the multiplayer doesn’t either, so all the intriguing bits Blacklight presents amount to good vs. bad(maybe) fighting in some city or a bombed out area because they’re supposed to. 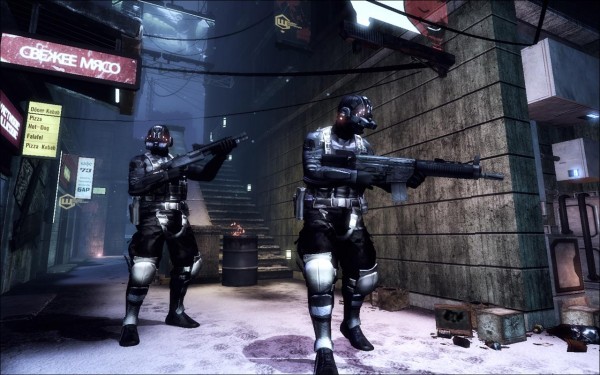 Blacklight: Tango Down does things well, it does things poorly, but nothing it does spectacularly. While the weapon customization is a nifty asset it doesn’t quite tip the gameplay over the cusp of mediocrity and into brilliance. The maps are cool as well, they have okay design and the environments look pretty good too, but the team maps start on one point for each side and everyone runs into each other and dies like most other FPS games. The coop is nothing amazing either, in fact it’s hardly worth the time to step into, and there’s hardly any story in the whole game other than some text files in the How to Play for some reason. At the end of the day, nothing about Blacklight: Tango Down is amazing, even though only a couple parts of it aren’t good, and with nothing amazing there’s not enough reason to play it.