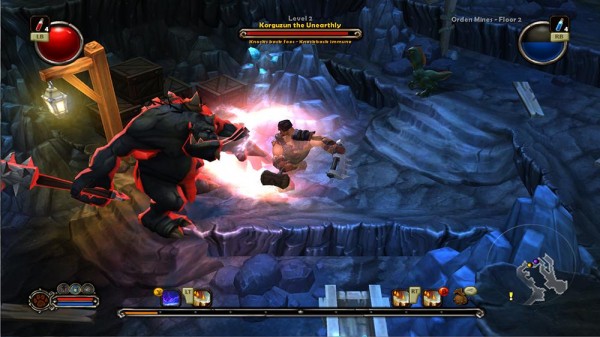 Dungeon Crawling – The feeling of going through each dungeon deeper and deeper with more skeletons and zombies is incredible feeling. At times there’s only a couple enemies and then a second you’ll be swarmed but you never feel powerless. The abilities and spells at your disposal can make you feel like a force to be reckoned with. Not to mention while destroying everything in your power, whatever loot you find that you want to sell immediately, just send your pet back to town and he’ll sell it for you, what a trooper.

Easy-to-use Controls – These types of games are not uncommon for PC players with mouse and keyboards but on a controller, it can be easily messed up. Fortunately for Torchlight, the new controls are so easily streamlined, it feels incredibly natural. With the triggers and Y and B buttons as your skills and spells and the X button as normal attack and freedom to move with the analog stick. It feels more accustomed to a person who has played Baldur’s Gate: Dark Alliance on consoles.

Charming Design – The characters here feel incredibly well voiced, from Syl who helps you amongst the quest to even the locals like the Wizard who wants you to collect Embers. The world Runic Games created here is detailed and the writing while accepting quests is well written with British charm.

Loot, Loot, and more Loot – If you’re a fan of trying to get as many treasures as possible to either sell or hoard the best items, you’ll fall in love with Torchlight. You’ll find weapons in this game that are capable of making an enemy disappear in broken ice and rings that help you resist elemental damage. But once you find better stuff, you’ll want to sell it for precious gold. 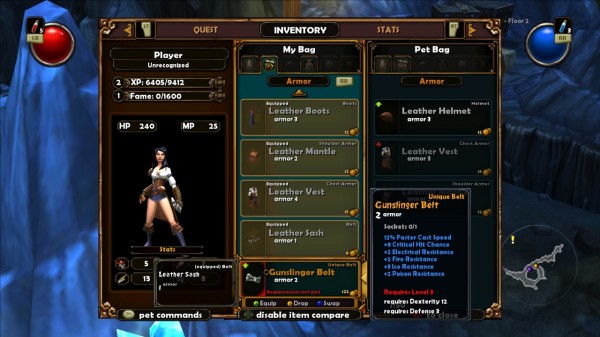 No Co-Op – While this originally wasn’t in the PC/Mac versions, it’s kind of a bummer to see it carry over here. To be fair, it was most likely not designed originally with co-op in mind (which will later be rectified with Torchlight II, hopefully coming to XBLA) but the fun of raiding dungeons with a buddy would have increased the lifespan.

Plot can get shallow – If you’re a fan of cut-scenes or an engrossing story, it’s…not super deep. Sure, the story is told to you and some of the characters are voiced but it does feel a bit lifeless. It could be from the style of game it represents but overall, not as engrossing story-wise.

Where’s the difficulty? – Having over 80 health potions and 60 mana potions made some of the battles in the game feel a little too easy. At times, it felt like mashing buttons with the right abilities and pressing the bumpers to heal until finally killing an enemy in a matter of seconds.

Slowdown – At times, there can be a ton of enemies on screen and while you’re trying to kill them with all your abilities, you’ll see some slowdown at times. It could be that because it’s a pretty big PC game on a downloadable median but it’s not fun to look at. It doesn’t kill the experience at all but seeing the slowdown isn’t what you’d want to see. 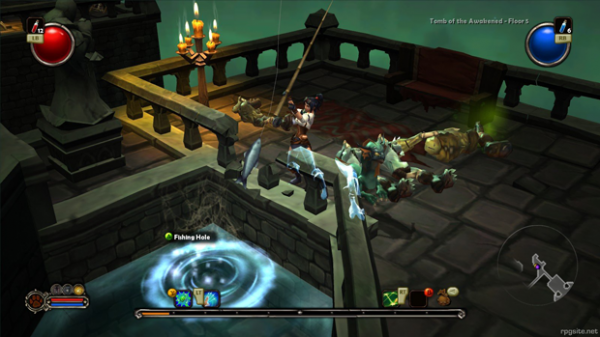 At the end of the day after killing wood golems and trolls, it still feels satisfying to traverse through the mines and dungeons of Torchlight. While co-op would have made this game as addictive as Diablo, it’s still tremendous as a single-player game. Of all the House Party games, this seems just as deserving of your 1200 points as Beyond Good & Evil of your 800 points. You’ll find no better adventure then in the world of Torchlight.

Torchlight‘s tried-and-true dungeon crawler formula keeps it grounded enough to give that meaty RPG experience that makes the game playable. Character progression allows for plenty of ways to play each of the three classes and keep them from being too archetypal. To give the game some spice, feeding your pet fish turn it into a variety of monsters to aid you and it gets two spells of your choosing which it uses autonomously. Unfortunately, if you aren’t driven by looting,which this game does flawlessly, or other signatures of dungeon crawling, there won’t be much for you here. The story’s not the slightest bit compelling and there aren’t any nifty puzzles or variety to break up the grind. That aside, the grind in Torchlight is largely enjoyable due to the variety of enemies types and environments to fight in. It might seem like a small thing at first, but the ability to insta-save no matter where you are in the dungeon makes Torchlight the perfect game to play when taking a break from homework or when waiting for friends. While the lack of story can be disappointing, the constant combat and reward, adventure and character progression make Torchlight an enjoyable experience that can always be returned to.