Pinball FX2 was developed and published by Zen Studios. The full game retails for free, individual tables can be purchased for 200 MSP. The Mars Table retails for 240 MSP. A copy of the DLC was provided by the publisher for reviewing purposes.

Last November, we reviewed Pinball FX 2 and recommended that people buy the game. While the initial game download was free, players could then choose to demo and buy individual pinball tables for 200 MSP a piece.

This strategy proved useful, and developer Zen Studios’ latest addition to Pinball FX 2 is the Mars table. The aptly named table features the same level of expert design and creativity as the other tables in Pinball FX 2, while fully integrating into your current stats and leaderboard rankings. 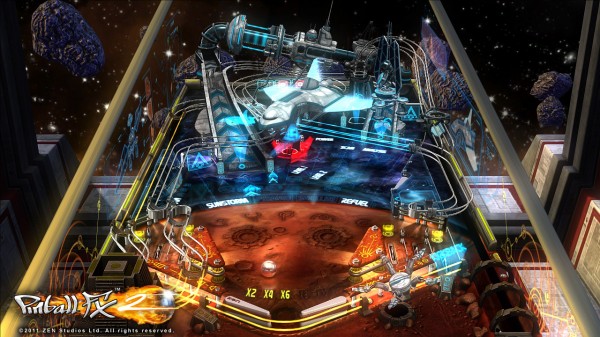 The Mars table looks exceptionally nice with plenty of moving parts, interactive objects and missions to undertake. There’s quite a bit to do despite the DLC only being a single table. The Mars table’s distinct sci-fi space-theme is captured perfectly thanks to the good music and sound effects, in addition to the impressive visuals. Three new Achievements round out the package, and as with the other tables, the Mars Table can played before purchasing. If you’re a fan of the Pinball FX games on XBLA, then there’s no reason not to add this table to your collection.