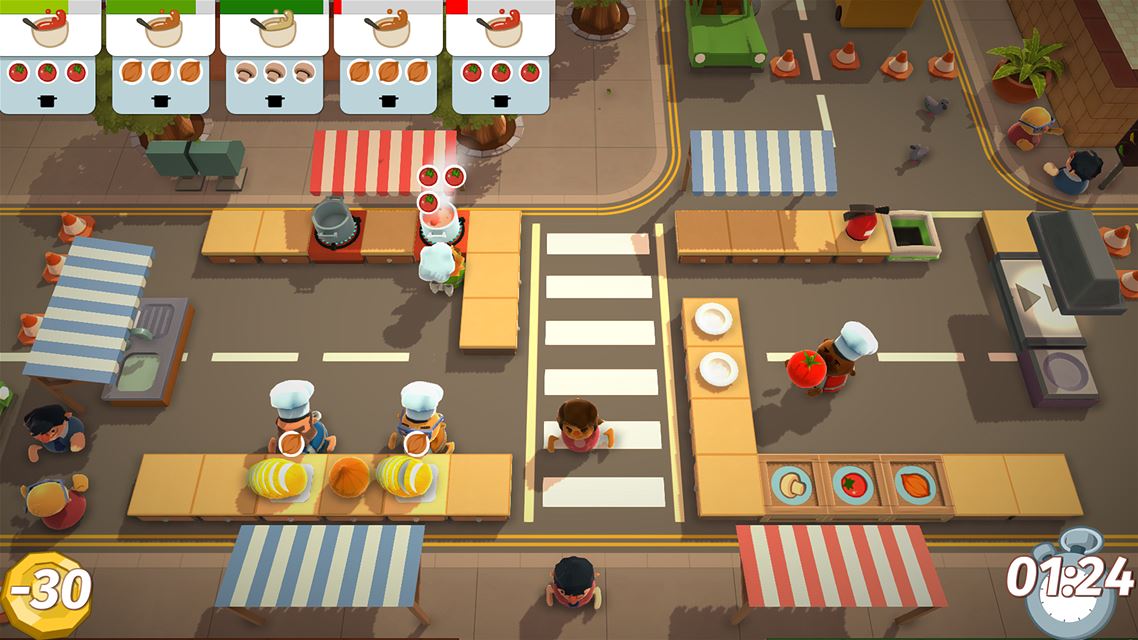 My culinary skills at home are less MasterChef and more Can’t Cook, Won’t Cook. But bring me a cooking game and I’m all over it. Sadly, it’s a genre that doesn’t see much light outside of mobile gaming, but British two-man development team Ghost Town Games hopes to change all that by bringing Overcooked to consoles. The game puts you and up to four friends straight into the frying pan as you set out to cook up a storm across the Onion Kingdom. Moving through a variety of oddly designed kitchens, you chop, clean, boil and fry your way to victory.

At the start of each level you are introduced to a new recipe containing two to four ingredients. You need to prep the ingredients, cook them, plate them up and serve them to a hungry mob of customers getting more and more impatient by the minute. The controls are simple enough: press A to pick up and put down, X to chop and the bumper buttons to switch between chefs. The kitchens, on the other hand, are not so simple! With moving counters, icy floors and even some levels set on moving trucks, this is where your teamwork and communication skills are pushed to their very limits.

Cooking with friends – Let’s first address the elephant in the room: Overcooked has no online co-op . A lot of people will stop reading at this point and look elsewhere. But the game really is best for offline play, and if decisions had to be made between one or the other, then Ghost Town Games made the right choice as I don’t think I’ve ever played a game that emulated family time so accurately. A few rounds in, it was soon “why is it always me washing the dishes” and “hurry up with that onion, you’re in my way”. It’s genuinely funny, and co-operation is best with people you feel comfortable yelling at. Gameplay is quick and easy to pick up too, making it ideal for families and non-gaming visitors.

A visual delight – Overcooked sports some pretty great graphics. Simple, colorful and effective visuals make it easy to distinguish each ingredient and kitchen detail. Players can choose from a wide selection of chubby sprites of all sexes, races and even disabilities, each with adorable cheeky smiles and goofy chef hats. You can also play as an animal if you prefer, with my personal favorite being the raccoon chef in a wheelchair. The level select screen is also impressive with its use of a van to represent your cursor as you drive through a springy 3D map to choose your next locale.

Musical accompaniment – The music deserves a mention too. Catchy and bouncy during the levels to help speed you along and with a more soothing Last of the Summer Wine style (ask your parents) to bring you back down when you’re at the level select screen. It’s also got the sort of ear worms that will find their way back to you when waiting for a bus or while stuck in a particularly boring meeting. 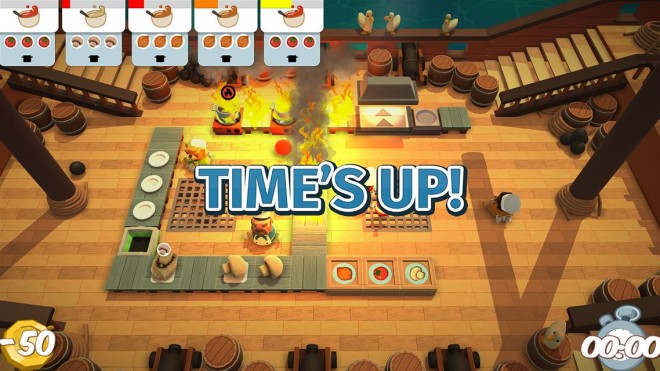 Table for one? – Overcooked is best served as a multiplayer party game, but for those times when you’re on your own and still want to play, you’re going to have a tough time of it. Game difficulty doesn’t seem to adjust for single players, and whilst the earlier levels decent challenge is fine, as the game progresses, it’s game over unless you have two or more buddies by your side. This is a shame, as there’s potential for a fun time management sim here, but it’s the party aspect that is being pushed as the selling point. I would also have loved an endless mode that could be played on your own, but the only other mode outside of co-op is versus.

Underdone – Overcooked is clearly designed to be fast-paced pandemonium, and, as such, each round is only about three minutes long. However, it feels like you are only just getting into the swing of things as the clock runs out. On top of this, points are only awarded for fully served meals. So if you get the soup cooked but just don’t get time to plate it up, you’ll earn zero points. It can take nearly a full minute to get to this point, so towards the end of a round I found myself standing around for the last 30 seconds knowing that there was no point continuing as I couldn’t earn any more points. If the scoring was given out at each stage in the cooking I could have still been rushing around until the timer ended and had a much more enthusiastic time.

Sticky toffee controls – Since each round is fairly short, the pressure is really on to get enough points to pass a level. Unfortunately, the organized chaos that Ghost Town Games was going for soon spirals into frustration due to control scheme inaccuracies. You can be directly facing an object and trying to grab it, but instead watch as your character picks up the item one square down. Cooked meals are dropped onto the kitchen counter instead of the plate you were facing, and your character picks up onions when you wanted tomatoes. There’s a fine line between humorously shouting at your co-op pals when they mess up and really reaming them out for it, but when the game messes up for them, what should be a light entertainment experience instead turns into a controller throwing punch-up. 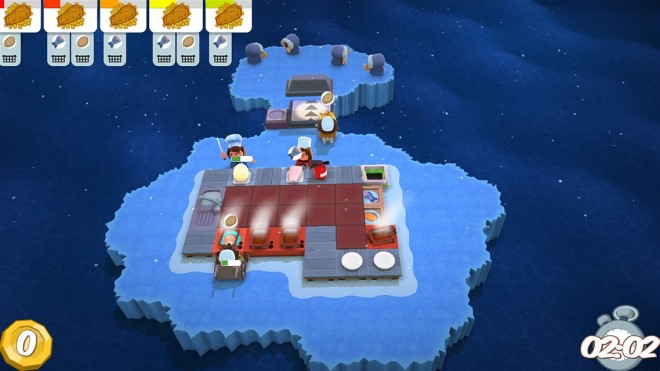 This is a tough one, as Overcooked looks great and has bucket loads of potential to be a highly likable co-operative game. The lack of online will clearly put off a few people; however, some odd design choices in scoring and the lack of any true single-player gameplay really stops Overcooked from being the game it could be. More importantly, its slack controls, which cause most of the problems, really do need to be addressed (hopefully in a patch) before I can fully recommend a purchase.

Overcooked was developed by Ghost Town Games and was published by Team17. It releases on August 3, 2016 for $16.99. A copy was provided by Team17 for review purposes. 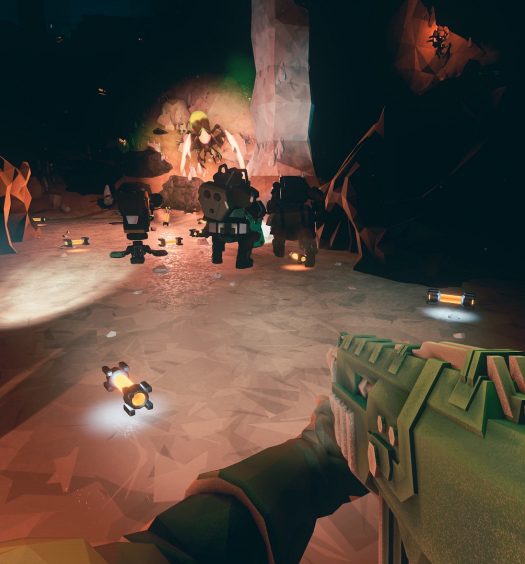