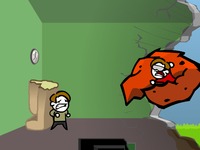 No Time To Explain innovates in development funding

Last month, indie developer tinyBuildGAMES released a trailer that garnered much fanfare on various gaming blogs. The community support was so overwhelming that the team of two (Tom Brien and Alex Nichiporchik) decided to try an interesting new scheme to allow the community to be more involved in the game, widen the scope of the final product, and explore different distribution channels.

The pair has adopted Kickstarter for their campaign, promising that $7,000 of funding will allow them to not only polish the game that they developed on their own but also widen its availability to iOS devices. Lower donation levels reward a digital poster and/or a preorder of the PC version of the game, while donations of $25 and up offer beta access and level creation to donors which can actually influence and add onto the final game.

Beyond these direct rewards that are typical to Kickstarter projects, tinyBuildGAMES promises to use any additional funds on top of the $7,000 minimum level to contribute towards XBLA/XBLIG and PSN development of the game (and undoubtedly future games from the duo, who seek pricy development kits). If the trailer or general demeanor of these two indie devs manage to impress you, a donation would certainly bring the game closer to Microsoft’s services in the future.