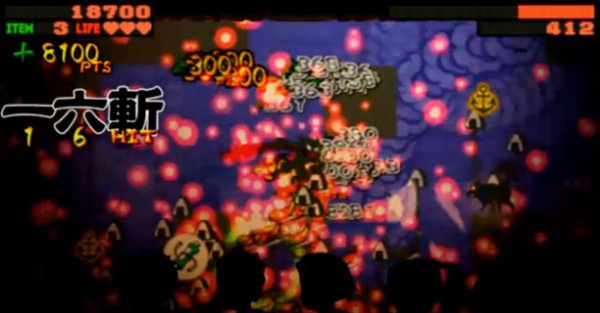 Shadow puppet theme – One of the coolest aspects of Nin2-Jump is its graphical style. Cave took a minimalist approach and it works. All of the characters are paper puppets moved around by sticks. The backdrop is dim and it really appears that it is all a performance up on stage. This occasionally interferes with the gameplay, but occurrences are rare. Everything about the game unapologetically Japanese. Unexpectedly, for a performance purportedly being watched by small children, this game has some of the craziest blood spattering effects ever when you die. It all adds to the theme, and is worth seeing.

Solid platforming – At its core Nin2-Jump is a platformer and it accomplishes this well. The grappling hook and ninja powers are great for getting around the stage and dispatching enemies. Once you learn how the game is meant to be played, it plays great in its own way. We experienced some frustration with it early on because it played a bit differently than we expected. But once we got the feel, it was smooth sailing.

Robust score attack mode – Fans of Cave’s games know that the score is the focus of their games. High scores are the only way to prove who truly is the most skilled. Nin2-Jump’s score attack mode has a system that will keep the experts busy and easily separates the amateurs from the pros.

Epic boss battles – The boss battles were a pleasant surprise and a nice distraction from the regular gameplay. At the end of each of the five levels there’s a rather large boss fight. There is a different gimmick for beating each boss and the fights are a lot of fun.

Charity – Nin2-Jump is already at a value price. But even more remarkable is the fact that all proceeds from this game through the end of June will go towards Japan disaster recovery. That is obviously a cause worth supporting. 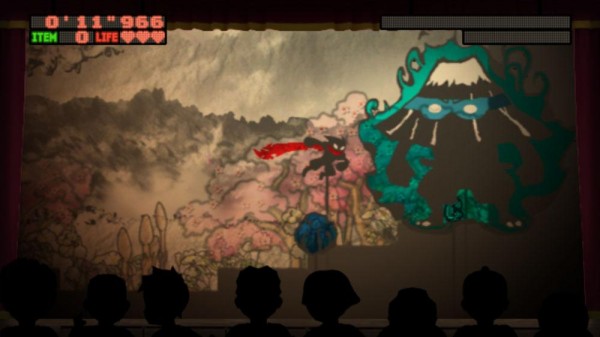 Finicky pick up mechanics – We noticed that the scrolls we passed through would occasionally not get picked up by the character, and it’s essential that all scrolls be picked up. This happens in a predictable way. In most games any part of the avatar needs to touch any part of the icon in order to pick it up. Not so in Nin2-Jump. In this game the hit box for the ninja (which is unfortunately not indicated) needs to contact the dead center of the scroll to activate pick up. This is exactly how most Cave shooters work with regard to dodging bullets. This method works here, but ends up being a little too precise for its own good. It’s not a big problem, just occasionally annoying.

Underwhelming story mode – The story comes off as really just being a glorified training mode to prepare players for score attack mode. Our other main gripe is that the level design just is not that great some of the time.

Hidden pick ups not hidden – Many games scatter icons to collect throughout the game. Normally these are located in out of the way places and offer power ups and other such things as rewards. Nin2-Jump has one Cave icon in each level. They’re often not hidden at all and are rarely difficult to get to. They can easily be collected during the  first pass through each level. There’s no in game reward for collecting them either, only an achievement. It feels like it was tacked on at the last moment. 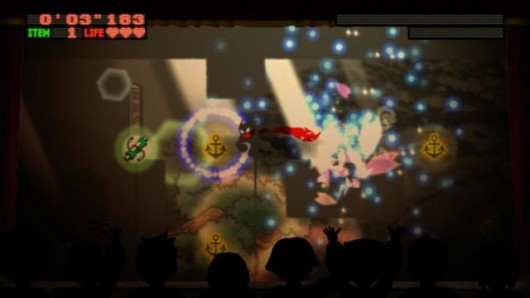 Cave should be praised for broadening their horizons and developing Nin2-Jump. While many fans were hoping for them to release some of their stellar back catalog of games, Cave chose to go the hard route. In doing so they will hopefully garner more fans because they produced a quality game here. The gameplay and theme might not be for everybody, and it certainly has its faults.  But its price point and charitable aspirations really put it over the top.