Monster Jam Battlegrounds was developed by Team 6 and published by GameMill Entertainment on Xbox 360. It was released on June 10, 2015 for $14.99. XBLA Fans’ Michael Cheng purchased a copy out of pocket for review purposes. 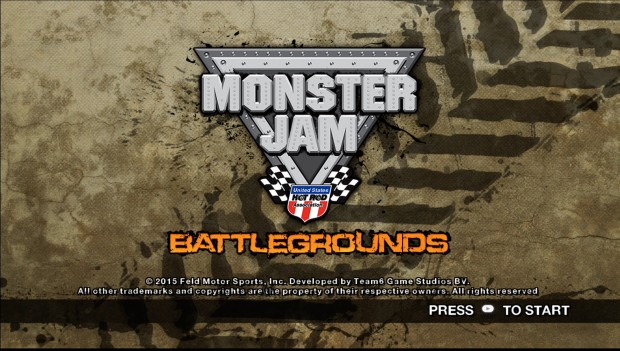 Monster Jam Battlegrounds is easily a contender for the worst game covered by XBLA Fans of 2015 and is possibly the front-runner. Never have I felt as hoodwinked by a game and had as much buyer’s remorse on an Xbox product before as I have now, and I have made many extravagant purchases such as multiple Xboxs and collector’s editions for games from different regions and brand new, out-of-print Xbox 360 games like Dead or Alive 4 and Rumble Roses. I’d venture to say this is a sick and cruel joke by Microsoft to state that the XBLA platform is dead, and everyone should move forward to Xbox One and ID@Xbox. How, in 2015, can anyone justify one minute and 10 seconds of loading time and then having another 15-second period of filler with a stadium cutaway before finally being able to play a level that lasts about 15-45 seconds? As if that isn’t bad enough, there is another 30 seconds of load time after finishing and leaving the level. This is only scratching the surface of Monster Jam Battlegrounds‘s world of problems. 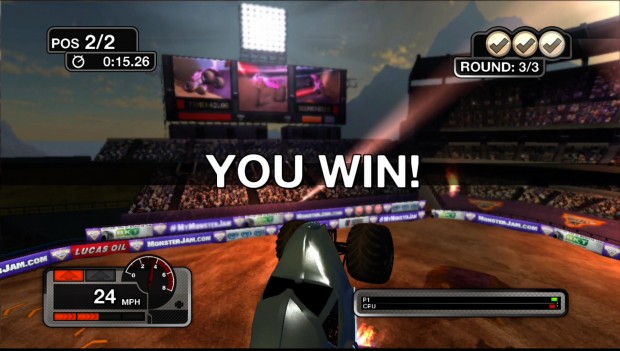 Quick to unlock customizations/upgrades — That’s about as much as I can praise it, as the customized trucks don’t seem to do anything different from each other; they just have different aesthetics and sizes.

Rewind — The player can click in the right stick to rewind backwards and undo some mistakes. It’s a welcome system, but one that exists to cover for sub-par game physics. I’d rather have good game physics and skip the rewind system, though. 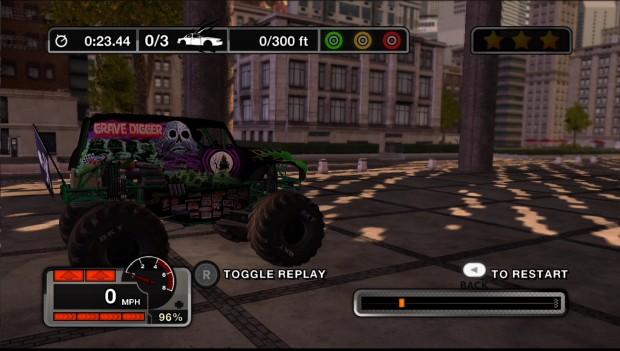 Load times — As mentioned, the player has to suffer through just under two minutes worth of load time for a short level. Why? The in-game material isn’t even that intensive.

Graphical issues — What do we have to show for long load times? Frequent framerate issues, very poor-looking pixelated flickering shadows, very low draw range (like when grass is being generated while you’re passing through the level) and sub-par effects all around. What did the load time even accomplish?

Sub-par game physics — On 2D levels, the truck still performs and spins around like it’s on a 3D level, which leads to many awkward situations. On 3D levels, the traction of the trucks are piss poor for almost comedic effect. Yeah, this is playable, but one has to wonder if the game physics were ever tested to see if that kind of handling is what they thought was ideal for their game. 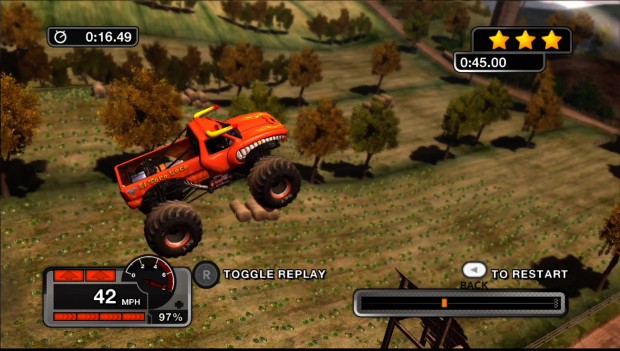 Disjointed track unlocks — Made much worse by load times, if you enjoy a certain game mode, too bad. You’ll have to play a bit of everything to unlock more tracks. It’s impossible to get invested in the game since having to sit around waiting and switching game modes often to unlock more stars to earn the next set of tracks in a different game mode kills all momentum of enjoyment.

No replay value — Once again, load times make this much worse. After finishing every event for the first time, what is the incentive to play again? There are online leaderboards, but having to fight the lousy load times just to play a different level negates any sort of competitive urge. Monster Jam Battleground tries to do too much and does very little to create memorable levels to encourage replay. To top it off, a lack of multiplayer prevents any extension to the life of the title that it desperately needs.

Lack of effort? — The quality of the game modes seems to deteriorate the farther down on the list it is on the mode select screen. The stadium races are a bit insulting as you don’t actually have to steer the truck yourself, leading to an almost glorified drag race on tracks that curve around. The freestyle segments in the stadium feature the player driving around aimlessly in the name of performing random stunts. Stunt mode is the last mode on the list and is the most disappointing. The first level, Forest, is well-crafted and thought out but, as the player goes further down the list, it gets lazier and lazier. For example, Desert destruction requires only four easily found cars be destroyed compared to the 20-car requirement of Forest destruction. Stunt mode was promising at first, but it gradually became an unenthusiastic experience. Amazingly, I have no qualms with the Skill Driving levels. 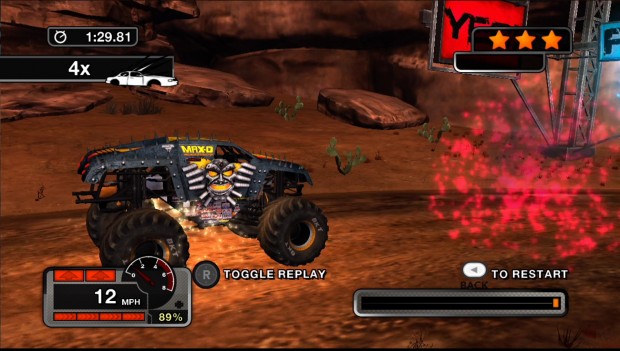 Fun is a subjective feeling, but there is no fun to be had in Monster Jam Battlegrounds. Please don’t let the easy difficulty of this game cloud the fact that nothing outside of the bare minimum actually occurs here. It takes five to seven hours to complete everything this game has to offer, and most of that is load times. Truly obsessive fans of easy Gamerscore may consider buying this title, but I still hate its guts and would recommend stepping outside and taking a nice stroll instead.

Achievement notes: Thankfully all of the Achievements are simple, as each of them are 33 Gamerscore with the exception of one for 43 Gamerscore. The difficulty spikes a little at the Forest Stunt mode challenges but settles down once the player uses an upgraded vehicle and figures out the game mechanics. Take advantage of the rewind feature for the least amount of aggravation.