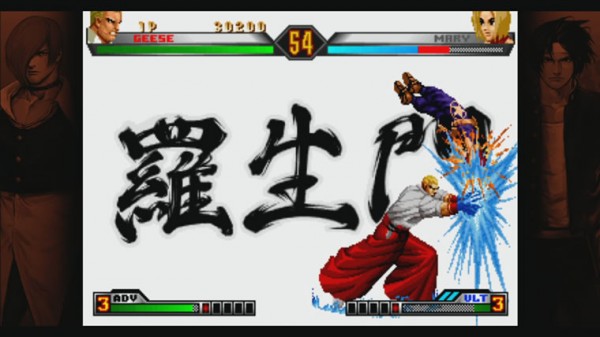 Beautiful 2D graphics – SNK/Playmore always got 2D right. They pushed the Neo-Geo to the limits to make this game. The sprites may not look like much now compared to a game like BlazBlue but they are filled with a richness of character that’s hard to match. Sometimes rival characters will throw taunts at each other before the match. All of the backgrounds are filled with Easter eggs. And many of the super moves are a lot of fun just to watch. Some may not be able to appreciate it, but for those that can, it’s a real treat.

Killer roster – KOF98UM has a roster of 45. Compare that to some modern fighters if you dare. The deep roster means there are plenty of fighters to master. Moreover, there is great variety not only in character design but also the play style in the fighters. The only bummer is that KOF98UM is considered a “dream match”.  As such it falls outside of the canon of the story. So, there is no storyline to help new players get to know the characters.

Gameplay – Anyone who has played fighting games over the last 20 years should be able to play KOF98UM at some level. But the gameplay of a KOF game is far different in tempo and feel from something more familiar like Street Fighter. In a KOF game each player must choose three characters to fight in succession. A player who only masters one character will be out of luck. Any fan of fighting games owes it to themselves to try KOF98UM out, if only to know their roots.

Extras – SNK/Playmore added a few nice touches for this release. They included the original Neo-Geo mode in the game for the purists, or for those looking for a history lesson. They also added a challenge mode which is a nice diversion from the regular game. 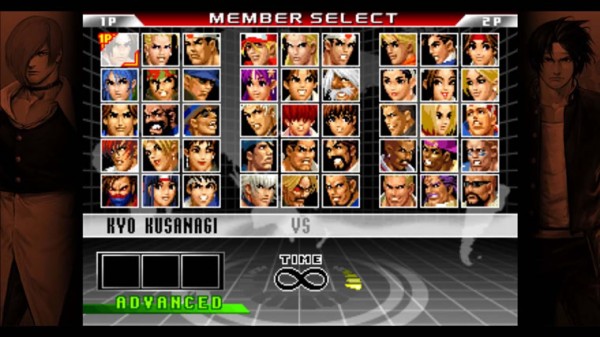 Poor localization – In a baffling move SNK/Playmore decided not to translate the end fight taunt screens. It’s all in Japanese. It doesn’t take anything away from the game, and the menus are all in English, but it just makes the product seem rushed.

Terrible net code – In this modern era it’s expected that you can play a fighting game over the net without lag. Lag in a fighting game is the ultimate game breaker. Unfortunately the net code in KOF98UM simply is not up to par. Even with two players with good connections this game just doesn’t perform like it needs to. For a game with such a huge following all over the world this is a real blow. It’s a rather moot point now though since there’s virtually no online community to speak of. 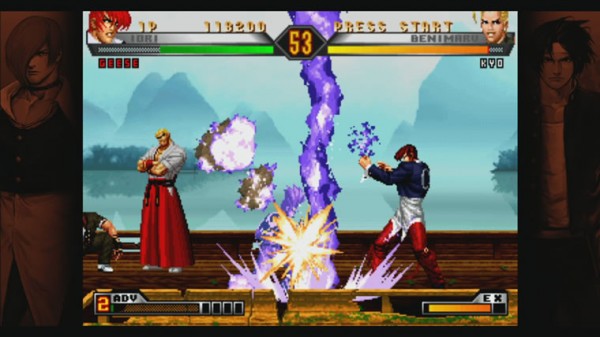 KOF98UM is a superb game ultimately cut down by terrible net code. If you have someone to sit on the couch and play with you then you’re set, but if not fighting the AI can get boring. There are likely many players on XBLA now who have never played a KOF game. They owe it to themselves to at least download a demo and see what they have been missing for all of these years.