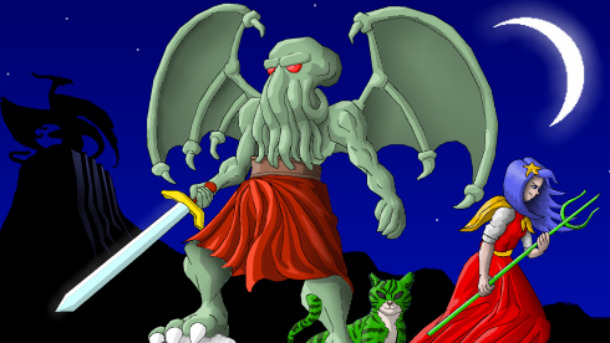 Cthulhu Saves the World was developed by Zeboyd Games, released December 30, 2010 and is available for 240 Microsoft Points in the Indie Games section of the Xbox Live dashboard. Cthulhu Saves the World is a throwback to the times of old, when all a game needed to captivate an audience was decent graphics, interesting music and a lofty level cap with plenty of level grinding to reach. And while not Cthulhu’s first game, it is definitely the first to feature him as the protagonist. Developed by Robert Boyd of Zeboyd Games (of Breath of Death VII fame) for the Indie Games Winter Uprising, a promotion intended to show gamers that just because a game is independently developed it doesn’t have to be lackluster. Does Cthulhu hurt or use his full heal spell on the Xbox Live Indie Games image?  Find out after the jump!

In Cthulhu Saves the World players take on the character of the ultimate evil himself, Cthulhu. Generally reserved as a villain, he finally gets to prove he has a good side! That is, until he regains his evil power. For you see, Cthulhu was all set to take over the world until some meddling do-gooders cursed him and locked away his powers until he can become a true hero, by saving the world so that he can destroy it.

Jokes aside, the storyline is that just right amount of ridiculousness that hits the comedy nail right on the head, and creates endless laughter. Cthulhu constantly has arguments with the narrator, scares the cliche towns folk, and generally just does as he wishes. It is clear that he has no idea what being a hero means, and that makes sense for he is the ultimate evil, but this creates an interesting dilemma as he needs to be a hero in order to become the ultimate evil again, and is just an enjoyable and unique storyline. And since this is a Zeboyd game you can expect many jokes and references to classical RPGs, which are clearly the inspiration for Bread of Death and Cthulhu Saves the World. The storyline works in every way possible. 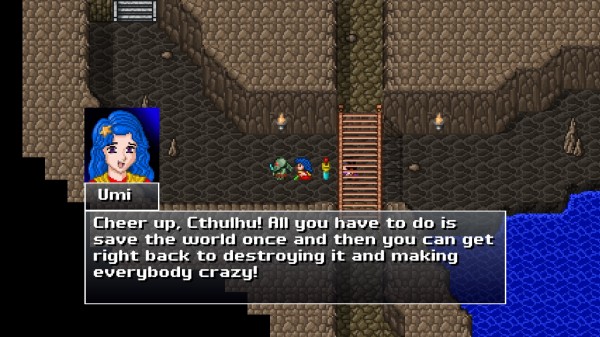 Here’s what we liked the most:

Random Encounter System: Yes, CStW features random encounter battles, but they are actually well done. Each dungeon/area has specific amount of battles that you must complete before random encounters stop, usually around 25. You may also pause and start a fight automatically (if you are in an area with monsters) through the menus option labeled “fight”. What is well done, however, is that you are not overburdened with battles like in most RPG titles with random battle systems. You can get in a good number of steps before monsters will come knocking at the door.

Humor: Again, this game is incredibly funny. The tutorial itself had me falling out of my chair, and that is not an easy feat! The closest comparison one could make would be a mixture of Deadpool comics, the Monkey Island series and obviously Lovecraftian references. Not a single joke fell flat in my experience.

Battle system: A very classic turn based style is used in this game, similar to the Dragon Quest or Phantasy Star series. Attacks are standard RPG fare (water, fire, thunder, etc) but the unique addition is the insanity spells/attacks. Cthulhu’s shtick has always been that the mere sight of him would drive almost all human beings insane, and that has been translated into this game. What’s tricky, however, is discovering which enemies to drive insane, as some are actually stronger when insane. The other new addition to the genre is the combo system, a counter runs in the top right corner for each successful attack, and when as high as you would like you may activate ultra powerful moves that are calculated using the combo meter, which is reset at the end of battle and by some actions that aren’t attacks. It is a very classical system that works well.

Leveling system: Standard leveling is applied, you collect XP from defeating enemies until you level up. What changes however, is the special “perk” you get at each level. Almost always you are given two choices, either two different stat increases or two different attacks, usually an attack that singles one enemy and one that singles all the enemies or the same but for buffs. It helps to create a sense of individuality, in that you can decide what classes your characters will be. 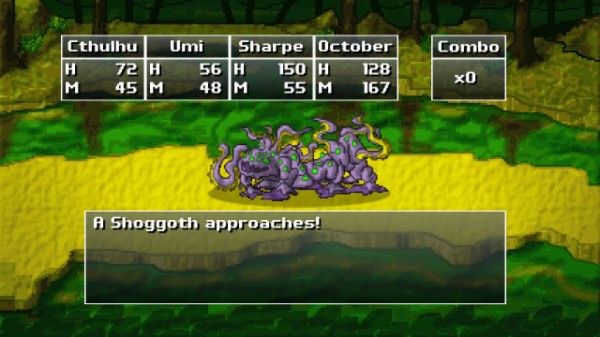 Lack of a map: The dungeons are quite large, with nothing to differentiate the paths you take from each other. Many times I got lost going around in circles, trying to figure out where I was supposed to go and to make sure I didn’t miss any treasure chests. A simple map system would have made this game just that little bit more enjoyable and easy to navigate. Many times you are left to wander on your own and hope that you eventually find wherever it is you are trying to go. This artificial padding for the game length is cruel and simply uncalled for.

Cthulhu Saves the World is a great title, and is definitely the best XBLIG turn based RPG at this time. Any self-titled RPG fan owes it to themselves to indulge in this title, and enjoy it for all they can. While not a title for every gamer, this is everything that makes RPGs great, and at 240MSP it’s such a steal!