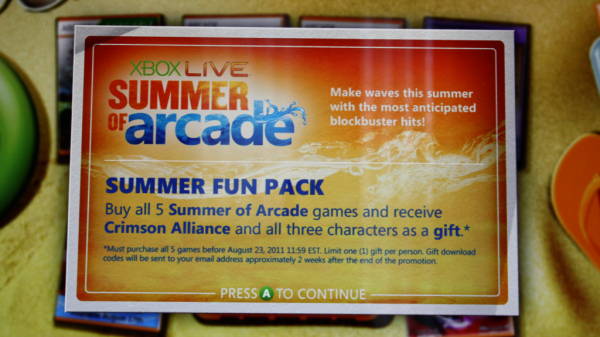 When it was announced that Crimson Alliance would be the bonus gift given to people who buy the whole Summer of Arcade lineup, the stipulations on the dashboard mentioned “all three characters” being included in the offer. That ambiguous yet specific language has been further explained by developer Certain Affinity, who told Joystiq that the full title with all possible content and characters would sell at the normal 1200 MSP but that they were also exploring other pricing options.

While these options aren’t yet clear and Microsoft has yet to approve of any unique pricing model, the wording of these two statements seems to imply that characters and possibly content could be offered piecemeal for anyone looking to simply dip their toes into the water on this upcoming Xbox Live Arcade game. We definitely look forward to seeing more creative pricing on XBLA and will follow up on this story as more details are revealed.