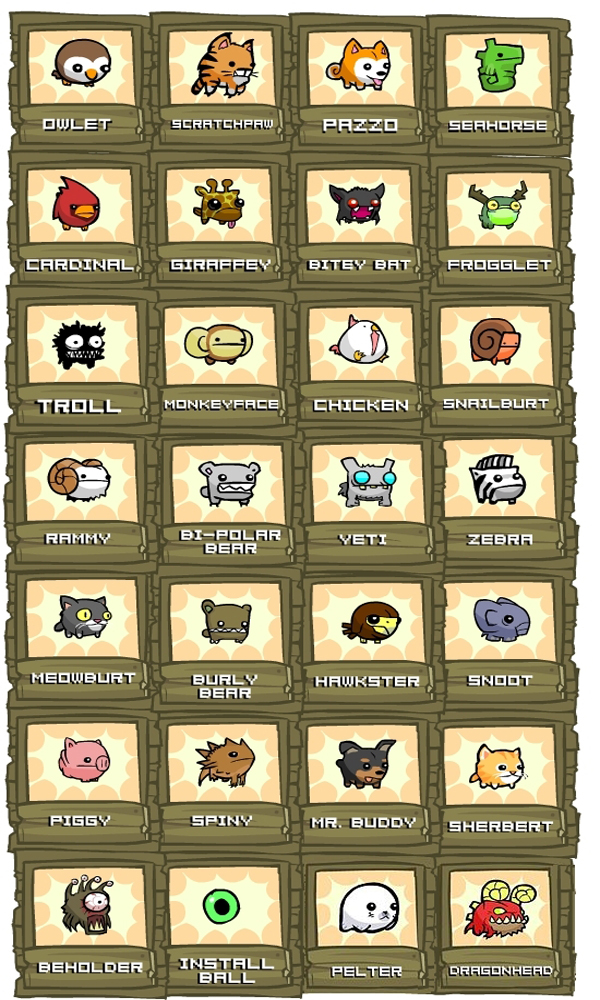 This is a guide geared towards helping you locate all the Animal Orbs in Castle Crashers. Before you collect every Animal Orb, you will likely need to look at our Items Guide in order to fully understand what is required to collect each Animal Orb. And when you are finished collecting the Animal Orbs, take a look at our Character Guide if you wish to unlock all the characters as well.

Owlet can be found in the “Forest Entrance” level. Right at the end of the level, there will be a large bush entrance that takes you to the next level. Right behind that bush, you will notice music notes floating up towards the sky. Walk behind that bush and you can find Owlet. 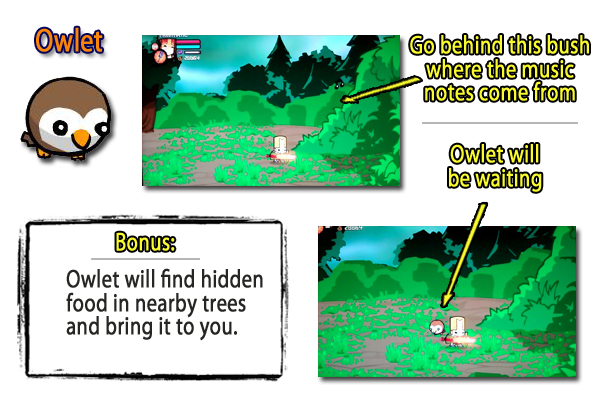 Seahorse can be found in the “Thieves Forest” level. Seahorse isn’t hard to find at all. About half way through the level, you will reach a part with a small stream on the screen. Seahorse will be hanging out around that stream.

Troll is located in the “Thieves Forest” level right after you find Seahorse. There will be a part where a few trolls attack you. Once you kill those trolls, you will notice a troll still trapped in the walls in the background. Drop 3 bombs on the partially cracked wall containing Troll and you will create an entrance allowing you to go retrieve him. 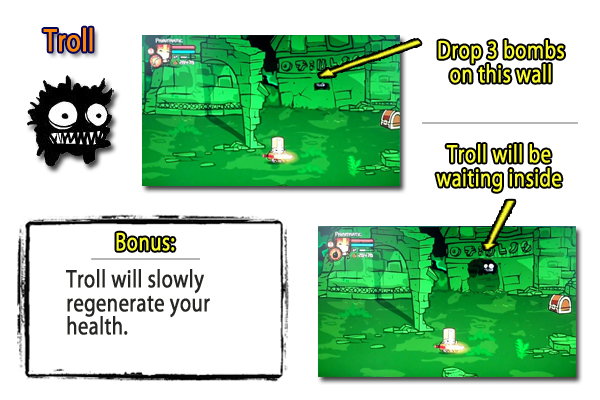 Rammy is located in the “Tall Grass Field” level. About half way through the level, you will encounter a Panda mini-boss. Kill that mini boss and Rammy will be left there for the taking. 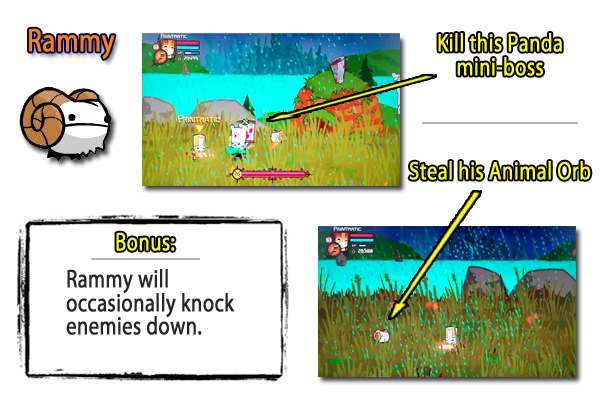 Bitey Bat is located in the “Pipistrello’s Cave” level. Kill the giant Bat boss in that level and he will deflate into a smaller bat that is Bitey Bat. Monkeyface is available for purchase inside the “Church Store” for $750 of in-game currency. 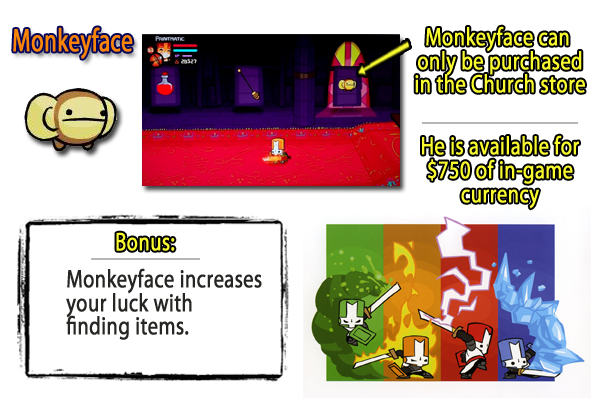 Meowburt is located in the “Parade” level. Once you have completed the “Parade” level you will be left with your only option being to walk inside a cave. If you pay attention, you will notice Meowburt peek his head out of the bushes in the background as you walk inside. Once inside the cave, turn immediately around and Meowburt will be waiting outside for you. 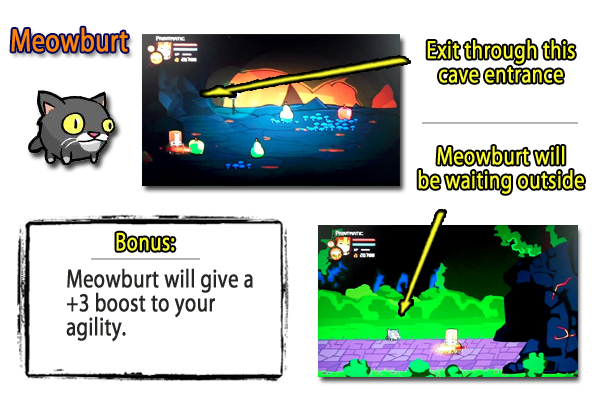 Snoot is located in the “Cyclops Fortress” level. After you fight off the first 2 waves of guards, you will notice a portrait of the Cyclops boss hanging on the wall. Right beside that portrait is a cracked area in the wall. Drop 3 bombs on that cracked area and Snoot will be behind that wall. 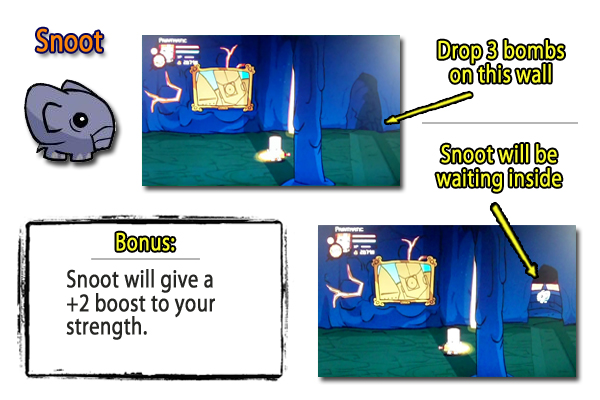 Spiney is available for purchase inside the “Volcano Store” for $680 of in-game currency. 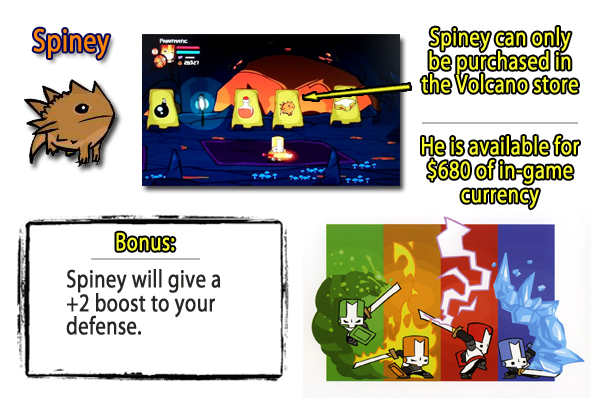 Cardinal is located in the “Industrial Castle” level. You will need to have unlocked the “Volcano Store” in order to purchase a sandwich. Once you have a sandwich, go to the “Industrial Castle” level and eat that sandwich allowing you to remove the castle door. Once inside the castle, you will fight a large Brute near the end of the level. Kill that Brute and you can steal his Cardinal. 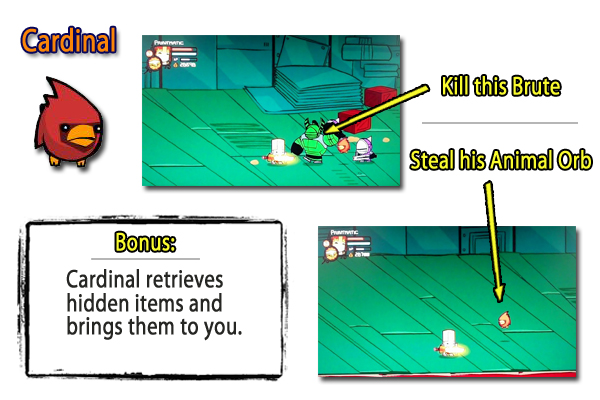 Burly Bear is located in the “Tall Grass Field” level. You will need to have unlocked the “Volcano Store” in order to purchase a sandwich. Once you have a sandwich, go to the “Tall Grass Field” level and fight through the entire level until you reach the grassy path on the mountainside. On the very left side of that mountainside, there will be a larde circular rock. Eat a sandwich and remove that rock allowing you to go inside the mountain area. Once inside the mountain area, you will notice a cracked area on the cave wall. Drop 3 bombs on that cracked area and Burly Bear will be hiding inside and to the right side of the hole those bombs create. Sherbert can be located inside the animal hut in the “Blacksmith” level. All the way to the left of the animal hut, there will be a locked door. Right above that door is Sherbert. You will need a fairly high jump in order to reach Sherbert. I suggest leveling up your magic to the point where you have a magical jump and that will allow you to jump high enough. Mr. Buddy is located in the “Home Castle” level. You will need the shovel to find Mr. Buddy. The shovel is located in the “Dessert” level as soon as you enter the level. Once you have the shovel, head to the “Home Castle” level and right after the crystal is stolen from the King, enter the door under his throne. Once inside the door, walk all the way to the left of the level and dig the spot in the floor allowing Mr. Buddy to appear. Giraffey is located in the “Dessert” level. Right near the end of the level, you will notice a spaceship taking the tops off of the pyramids in the background. As that happens, there will be a dig spot located in the sand. Dig that spot and you will find Giraffey. 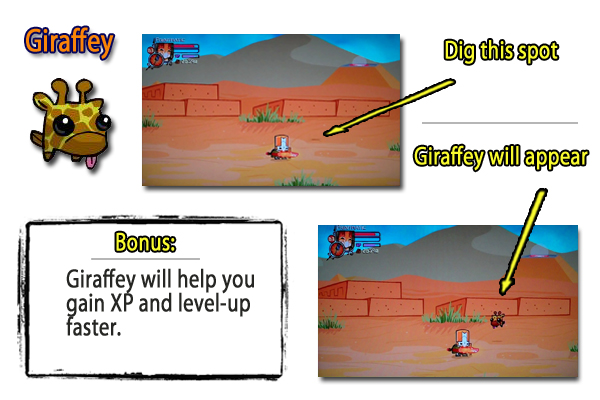 Install Ball is located in the “Alien Ship” level. After you have triggered the 1-minute countdown to exit the ship, you will encounter 3 aliens. Kill those aliens and look in the background. You will notice a small opening and Install Ball will be located inside the opening to the right side. 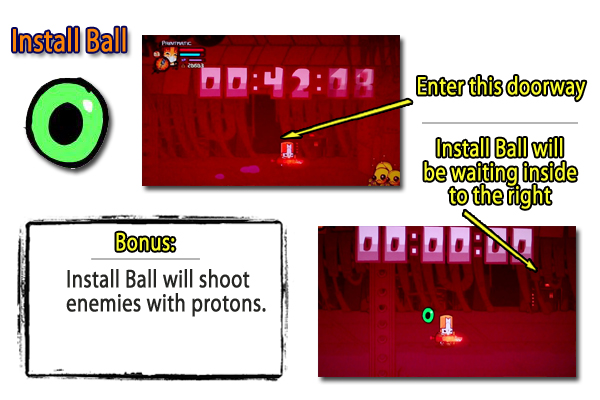 Zebra is located in the “Dessert Chase” level. At some point in this level a cut scene will show an enemy on a camel running away with Zebra following him. Run through that level and down try to kill anything on the way, it will only waste your time. Catch up to that enemy and hit him once to knock him off his camel. Kill him and you can steal his Zebra. Be careful not to allow him to get back on his camel because he will try to escape. 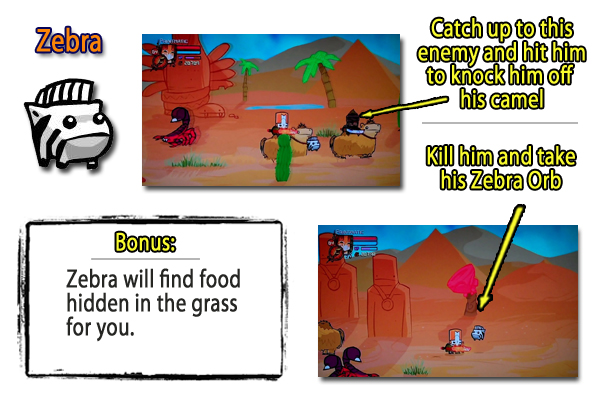 Scratchpaw is located in the “Sand Castle Interior” level. As soon as you enter the level, you will notice a cracked area in the background wall. Drop 3 bombs on that cracked area and Scratchpaw will be located to the right side behind that wall. 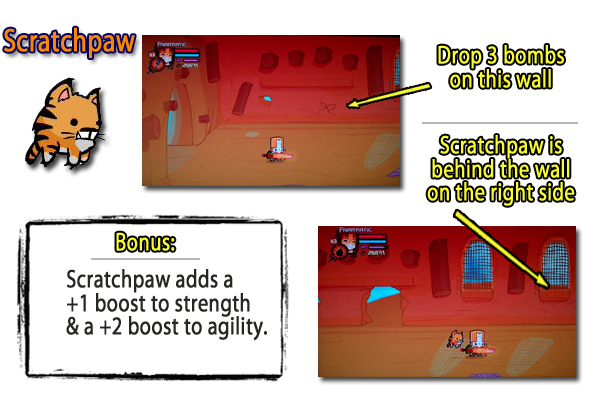 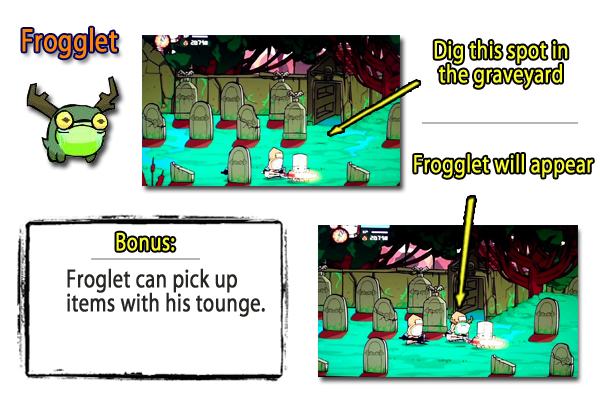 Snailburt is located in the “Marsh” level. Shortly after you defeat the Troll boss, you will see a small brown hut and Snailburt will be waiting right beside that hut. 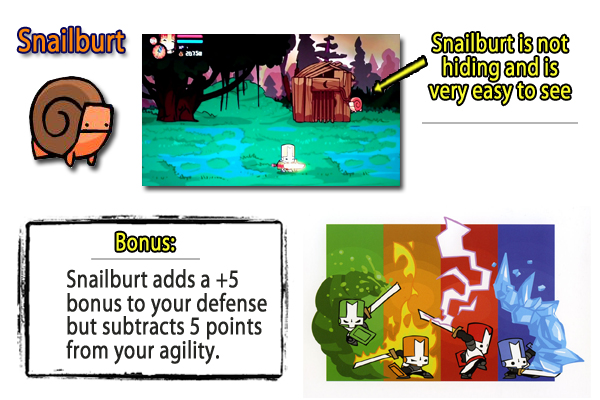 Piggy is available for purchase inside the “Swamp Village Store” for $585 of in-game currency. 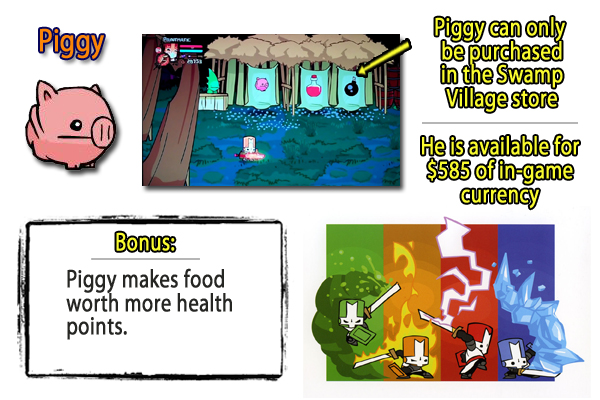 Hawkster is located in the “Tall Grass Field” level. You will need the horn to retrieve Hawkster. You can get the horn by defeating the Corn boss. Once you have the horn, go to the “Tall Grass Field” level and defeat the 4 Panda’s in the dirt area with 2 igloos. Once you have defeated them, stand by the sign that has a picture of the horn on it and blow the horn. Hawkster will then come out of the igloo to the right. 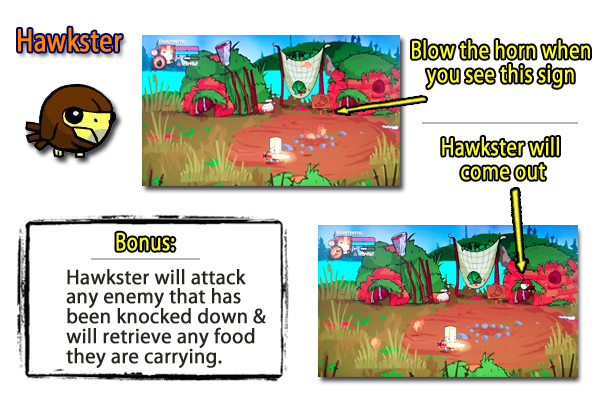 Chicken can be found in the “Medusa’s Lair” level. At the very beginning of the level, there is a dig spot. Dig that spot and Chicken will appear. 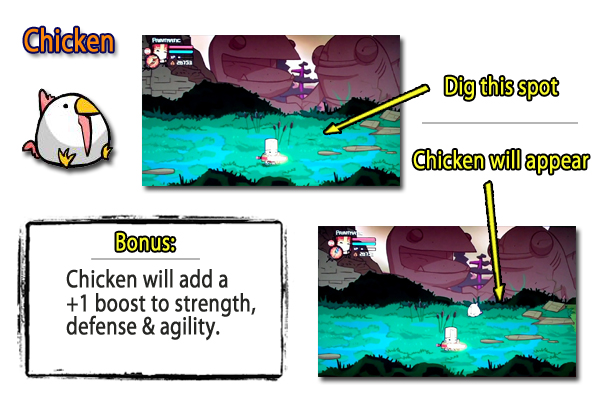 Beholder can be found in the animal hut inside of the “Blacksmith” level. In order to retrieve Beholder, you will need to find Cardinal first. Equip Cardinal as your Animal Orb and enter the “Full Moon” level. As you work your way through the level, you will find green huts near ladders. Walk near the second green hut and Cardinal will go inside and retrieve a sword for you that is shaped like a key.

Once you have the key, go back to the animal hut inside the “Blacksmith” level. At the far left of the hut, there will be a door with a lock on it. Swing the key sword at that lock and the door will open. Beholder will be waiting inside. 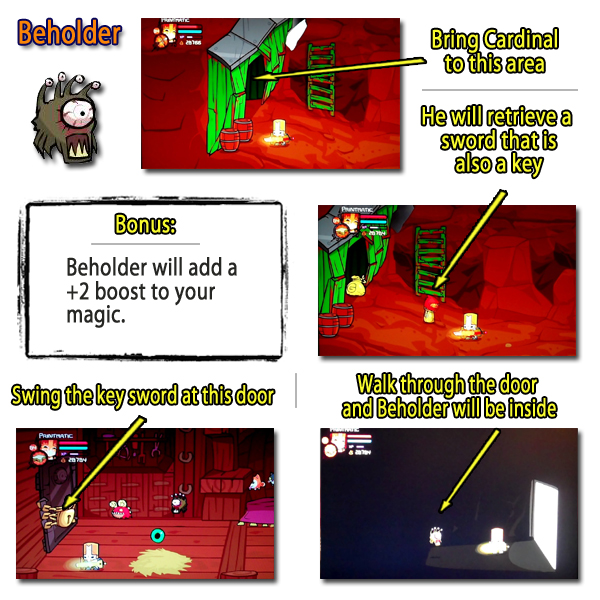 Yeti can be found in the “Snow World” level. Near the end of the level there will be a few houses to the right of the ice cave entrance. Behind one of those houses will be Yeti. 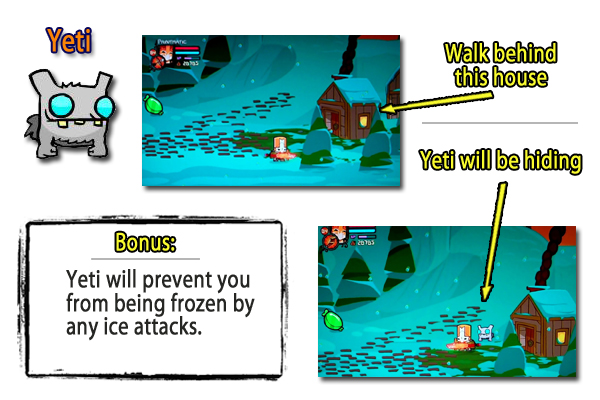 Bi-Polar Bear can be found in the “Snow World” level. Right after you pick up Yeti, go stand by the horn sign near the ice cave entrance. Blow the horn and Bi-Polar Bear will exit the cave. Pazzo is available for purchase inside the “Snow Store” for $750 of in-game currency. 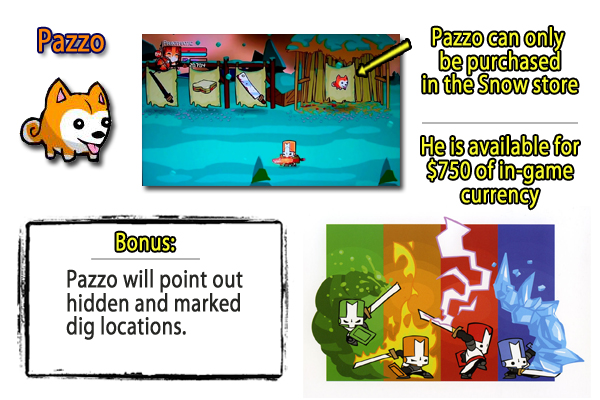 Dragonhead is available for purchase on the Xbox Live Marketplace for 160MS points ($2). He is found in the “Necromantic” DLC Pack. 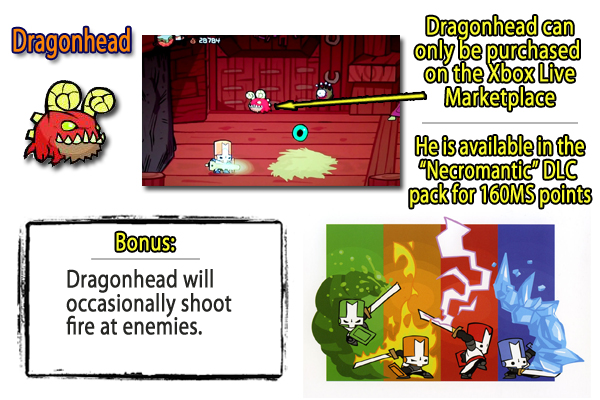 Pelter is available for purchase on the Xbox Live Marketplace for 160MS points ($2). He is found in the “King” DLC Pack. 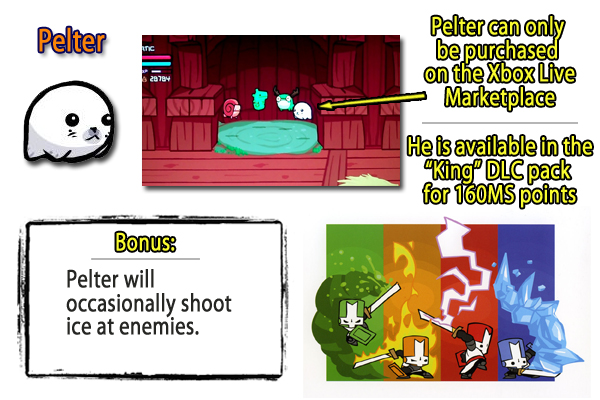 When you’re done collecting all of these, you should have 28 Animal Orbs. Make sure you check out our Items Guide and the Character Guide for more collectibles and unlockables.