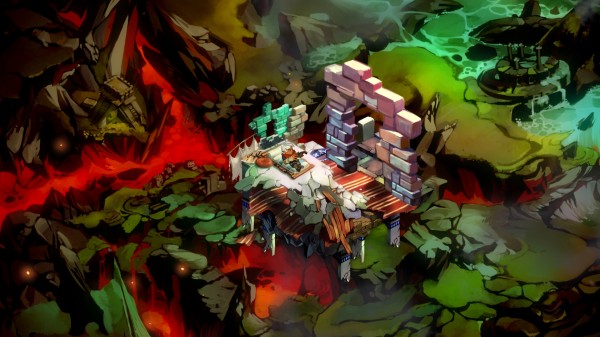 Bastion is a very unique game; one that’s very hard to explain. Supergiant Games has made a game that will be built around you, literally. While you walk through the level, the walls, floor, items and creatures that populate every room and hallway are stacked in front of your character. So, if you were to stop moving, there would be no new areas to go to. You would simply see only what has already been laid out in from of you. When it comes to the audio, the narrator will constantly change his tone and dialogue based on what you decide to do. You continue to walk by rooms without exploring  the contents? He’ll talk about how your ignoring your surroundings. Decided to destroy all the urns in every room you walk into? The narrator will talk about you redecorating the place.

Many games have tried to create an experience that is based on choice, but the story is predetermined once that decision is made. In Bastion, the narration coupled with the world being dynamically built there’s never the absence of choice . That’s what is so unique about it. It’s a world that doesn’t exist without the player. It is dialogue that isn’t uttered without the player making a decision.

IGN took the time to cover Supergiant Games’ upcoming title Bastion in their ongoing Road to E3 2011 feature. As a site dedicated to the latest news and reviews on all things XBLA, we didn’t want you to miss this. Check out the video, and then come back for a bit of commentary. Welcome back, now on to the commentary. Now, come on!?! How is it possible that someone was born with that voice? The narrator’s voice sounds like the voices of Clint Eastwood and Samuel Jackson decided to join forces and become a super mega voice. It’s a very unique and powerful voice that fits the game very well. For more about Bastion’s unique narration be sure to check out our interview with the developers.

It’s no secret that we here at XBLAFans are very excited to see the release of Bastion. How about you?