Alien Breed 2: Assault is the second of three downloadable games on XBLA by Team17 Software.  You don’t have to know about the first game, Alien Breed Evolution to enjoy the newest installment.  All you need is the will to survive and a deep-seated hatred for space bugs.  You will also need to put down Halo: Reach for like 5 seconds…I’ll wait.

In a seemingly deserted ghost ship, enemies can burst from any wall or hole in the ground, forcing you to constantly be on guard.  Running and gunning will serve no purpose except a quick demise.  Alien Breed is a game of ammo conservation and cautious exploration.  The entire ship is falling apart and infested with critters, so in addition to squashing bugs, you need to avoid fires, explosions, radiation, gun turrets, and other mechanical hazards.

The game draws from an earlier genre of top-down shooters, with the additional ability to switch viewing angles and smooth graphics.  While the theme may be a bit retro, the challenge is as current as can be.  It’s not breaking any new ground, but Alien Breed is giving you the bang for your buck.

Cool comic book style- Most of the dialog and exposition take place like a comic book…if it was drawn in green tones.  The style works and the voice acting is not overdone.  Since the plot isn’t even that important you don’t have to pay attention, but the frames are drawn well and move the plot along without excessively long cutscenes.  When there are cutscenes, they look pretty decent and the animation is solid.  Most of all, they are short and only serve to ramp up the action. 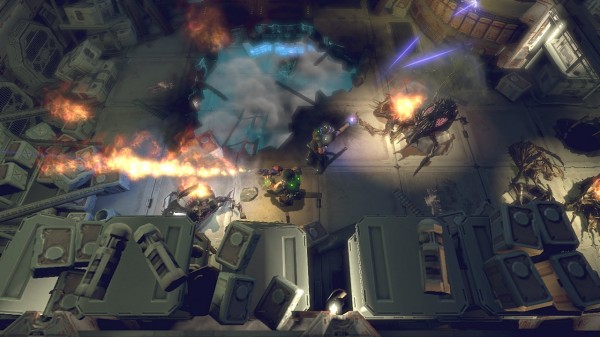 Run + Gun  = Die– This game is no push over.  The often scarcity of ammo and the nearly constant barrage of enemies gives you few options for survival so you’ll have to develop swift but calm techniques when dealing with situations that will quickly get out of hand.  Weapons and items can be upgraded with credits found in lockers and dead bodies, or lying conspicuously out in the open.  It’s a trap!

It’s freakin me out man- The game has a suspenseful soundtrack and the noises of the creatures are particularly sharp and spine tingling.  Random metallic noises and rumblings make you feel like things can fall apart at any moment…and they sometimes do.  The ship is mostly taken over by organic pods and alien goo.  It’s gross and you just want to torch everything.  Fortunately, you have a flamethrower.

Exploration station- There is a good amount of exploration in the game as the ghost ship is supposedly massive.  All of the exploration is not mandatory, but finding as much ammo and credits as possible is virtually a necessity, so it definitely pays off.  You can also find data logs if you’re into that sorta thing.  But to reiterate, there are bugs everywhere so every room is a new opportunity to die.  Sorry to be so grim…

Controller challenge- So picture this: Left thumb on analog stick, right thumb aiming weapon, right index on the trigger, left index ready to use items/throw grenades.  Do this while getting attack from all angles, then try to switch your weapon or items.  How will you do this?  Unless you have an extra left thumb lying around, you’ll have to stop moving entirely to hit the d-pad.  This was a constant source of frustration since you can quickly get ganged up on if you stay in one spot.  A more helpful method would have been similar to Metal Gear where the action pauses while you equip/use an item.  I can only do so many things at one time. 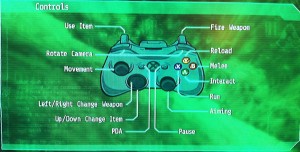 Do this, do that…mwah, mwah, mwah- Getting this big tin can to work involves a whole lot of running around grabbing item A and getting back to point B.  You have to go do this then find out it won’t work and do something else.  Either way, you are simply fighting your way to the next waypoint on the map to move things forward.  It may get repetitive from time to time, but remember that this game is more about survival and constantly battling forward, not existential fulfillment.  In other words: shut up and keep shooting bugs.

Bugs in the system- Not only are there bugs on the screen, but one particular time the game would not move forward as the AI character you are protecting refuses to stop pushing buttons on a door.  Others have reported a similar issue, and if you don’t have a save point from before that point, you may get frustrated enough to not bother.  Gamers today are impatient and have many “big” titles to play so anytime a game doesn’t work right it gives them a chance to toss it down and play something else.

Alien Breed 2 is another good example of taking an earlier style of gameplay and putting a nice current gen shine on it.  It doesn’t try to be retro, but since it’s not a FPS like every other game it may seem that way.  However, if you play it you realize that downloadable games can be worth the money and don’t need to have the word “Halo” in them to be a good shooter.  Take a different perspective on things and give this game a try.  For $10 it’s not a huge investment but certainly a valid challenge.  It’s also a reminder that tough shooters existed before hyper-real visuals and first person view.